Michelle Pfeiffer or Michelle Marie Pfeiffer is an actress from the United States. She is married and a mother of two.

Michelle Pfeiffer‘s love life has been a beautiful one. She married Peter Horton in Santa Monica in 1982. They split in 1988 and were divorced two years later. Horton said that they split because they used to focus more on their work than their marriage.

After her marriage to Horton, Pfeiffer had a three-year relationship with actor/producer Fisher Stevens. Later in 1993, Pfeiffer started dating television writer and producer David E. Kelly.

In March 1993 they god married and are still together. In the same year, she adopted Claudia Rose Kelly. In August 1994, Pfeiffer gave birth to a son, John Henry. 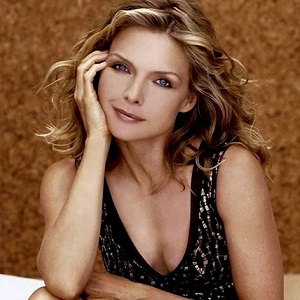 I used to smoke two packs a day and I just hate being a nonsmoker... but I will never consider myself a nonsmoker because I always find smokers the most interesting people at the table

Somewhere along the line I made the switch and was able to look at the bight side rather than the dark side all the time. Now I look at everything I have and think how lucky I am

I look like a duck. It's the way my mouth curls up, or my nose tilts up. I should have played Howard the Duck.

Who is Michelle Pfeiffer?

Michelle Pfeiffer or Michelle Marie Pfeiffer is an actress from the United States. Pfeiffer is best known for her versatility, period roles, the ability to mask her true feelings while in character, and portraying funny, intelligent female characters. She is remembered for her remarking roles in Batman Returns, Dangerous Minds, What lies beneath, and Hairspray.

Michelle Marie Pfeiffer was born on April 29, 1958, in California, United States. As of 2021, she is 63 years old. Her nationality is American and her ethnicity is mixed(German, Swiss-German, Swedish).

Pfeiffer was the second of four children of Richard Pfeiffer who was an air-conditioning contractor, and Donna, a housewife. She has one elder brother, Rick, and two younger sisters, Dedee and Lori. Michelle Pfeiffer spent her childhood in Midway City.

Talking about her Education background, she graduated in 1976 from Fountain Valley High School. Pfeiffer attended one year at the Golden West College, where she studied to become a court reporter. But it was while working as a supermarket checker at Vons, a large Southern California grocery chain, that she realized that she wanted to pursue a career in the acting field. She then started to take part in different beauty pageants and acquired an acting agent and began to audition for television and films.

Michelle made her film debut in 1980 in the movie “The Hollywood Knights”. In her early acting period, she played television roles in Fantasy Island, Delta House, and BAD Cats. Pfeiffer also did some theatrical roles which included falling in love again, Charlie Chan and the Curse of the Dragon Queen which was not quite a success.

Michelle Pfeiffer made a comeback with her first major film role as Stephanie Zinone in Grease 2(1982), the sequel to the smash-hit musical Grease (1978).

Some of the movies where she has acted include Scarface, The Witches of Eastwick, Dangerous Liaisons, The Fabulous Baker Boys, Frankie and Johnny, Batman Returns, The Age of Innocence, One Fine Day, What Lies Beneath, Stardust, and Hairspray among others. Interestingly, Michelle had turned down the main lead in Pretty Woman, which was done later by Julia Roberts.

Pfeiffer’s career picked up momentum in the mid-’80s as she proved she was more than just a pretty face by acting opposite some of the most respected names in the business (Al Pacino in Scarface, Jack Nicholson in The Witches of Eastwick).

In 1988, she showcased her versatility with three diverse turns in a trio of distinctly different films: the ubiquitous woman caught between two men in the action flick Tequila Sunrise; a Mafia widow trying to start over in the comedy Married to the Mob; and a chaste 18th-century do-gooder targeted by a lothario in Dangerous Liaisons, a devastating performance that earned Pfeiffer her first Oscar nod.

Now an A-lister, Pfeiffer was careful not to pigeonhole herself, appearing in romantic comedies (One Fine Day), blockbusters (a delicious turn as Catwoman in Batman Returns), musicals (The Fabulous Baker Boys, which earned her a second Academy Award nomination) and myriad dramas, including a charming performance as Jackie O.’s No. 1 fan at Love Field, which netted her a third Oscar nod.

After lending her voice to the animated Sinbad: Legend of the Seven Seas, Pfeiffer took a four-year hiatus from acting. But she returned full-force in 2007, starring in Amy Heckerling’s romantic comedy I Could Never Be Your Woman, and subsequently anchoring the fantasy adaptation Stardust and the period drama Chéri.

Michelle Pfeiffer: Salary and Net Worth

Talking about the rumors, in early 2017 there was a rumor which stated that Michelle Pfeiffer was dead when a Facebook page “R.I.P Michelle Pfeiffer” got about 1 million likes. However, this news was completely false. There was also some news that Pfeiffer quit acting but she turned down the news by making a comeback.