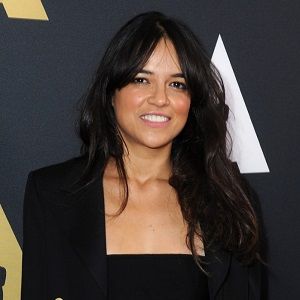 I want them to listen to me for what I am saying. And I think the best way to do that is to sniff my armpits, and like, sit and burp every now and then

I am looking forward to seeing my buddy Colin represent in front of Pacino. That's sweet

I just decided to play make believe, memorize it like it was just some kind of song and just take the emotion out of the words. And I did. I goofed a couple of times.

In the later 1990s, Michelle Rodriguez got engaged with her Muslim boyfriend. She was also happy to have him but later he forced him to change her religion. With the start of the 2000s, she called off this engaged with him rather than being married.

In 2001, while filming in the Fast and the Furious she began her love affairs with her co-star Vin Diesel.

However, this love life was short-lived. They broke up within one year. In 2003, Michelle began dating Olivier Martinez.

In July 2006, Rodriguez told Cosmopolitan Magazine that she is not a lesbian but is experimenting with both the sexes. She has been to several relationships. In early 2002, Colin Farrel and Michelle met each other on the set of their joint film. The couple was also spotted at several other events. But somehow this also didn’t seem to work for her. They broke up in 2003.

Jesse Jane was also to be dating Michelle. They allegedly hooked up in 2003 and split up in 2005 after dating for two years. “Bloodrayne” co-star Kristanna Loken and Michelle were said to be dating in November 2006 which came to an end in 2007.

She was then seen with model Cara Delevigne in 2014. She was seen with Zac Efron. Zac and Michelle were first seen together back in June 2012 they were just hanging out. Then in late June 2014, they were spotted on vacation together. Zac was also once spotted kissing actress Michelle during their vacation.

But they split in late August 2014. Since then Michelle is seen single.

Who is Michelle Rodriguez?

Michelle Rodriguez is an American film and TV actress. She made her debut in the independent film Girlfight, and she was recognized by the National Board of Review.

She went on to do many very popular roles like The Fast and The Furious, Blue Crush and S.W.A.T. For 2005 and 2006, she starred on the hit TV series, Lost.

She was born in San Antonio, Texas, in the United States of America. Her childhood name was “Mayte Michelle Rodriguez.” She is an American of Puerto Rican and Dominican descent.

Her parents are Carmen Milady Rodriguez and Rafael Rodriguez (father). With her mother, she moved to the Dominican Republic at the age of eight years old and lived there until the 11.

Michelle was not a good student. She was suspended from five schools, Also had dropped out from high school several times. For being an actress and to move forward in an acting career she dropped out of her business school. At the end of the 1990s, she gave several auditions for an ad.

For being an actress and to move forward in an acting career she dropped out of her business school. At the end of the 1990s, she gave several auditions for an advertisement.

Michelle Rodriguez’s first move was in 2009 from this very year her career started to take on. In 2000, Michelle played the role of a Boxer as Diana Guzman in the movie, Girlfight.

Her performances as Diana Guzman in Girlfight was as a troubled teen who decides to channel her aggression by training to become a boxer. Rodriguez played roles in other successful movies.

Letty in The Fast and the Furious (2001) and Rain Ocampo in Resident Evil (2002), she also appeared in Blue Crush and S.W.A.T was among the most successful movies. During 2004, she lent her voice to the game Halo 2, playing a Marine.

She also provided a voice for Liz Ricardo in the Cartoon Network series IGPX. From 2005 to 2006, she played on the television series Lost tough cop, Ana Lucia Cortez. While in 2008, she appeared in the political drama Battle in Seattle.

Later that year, she starred in James Cameron’s high-budget scientific adventure epic Avatar. Which became the highest-grossing film in history and he became the most successful film to date. In 2010, she appeared in Tropico de Sangre as Minerve Mirabal. Likewise, she appeared in Battle: Los Angeles in 2011.

In 2015, she appeared in Furious 7 which grossed over $1.5 billion worldwide. In 2017, she lent her voice Smurfs: The Lost Village. She also starred in the Fate of the Furious, which broke records for the largest global box office opening of all-time.

Michelle’s Net worth is $30 Million which is earned by her acting career. Most portion of her income is an outcome of her film career but her salary is not revealed yet.

She was nominated and honored with several prestigious awards. In 2000, she got nominated in Las Vegas Film Critics Society Awards for Best Actress and Best Female Newcomer. She won this award that year from her later nomination.

She was nominated for this award for her role in the movie, Girlfight.

Talking about the rumors and controversy, Michelle Rodriguez slammed the rumors she would play Jessica Cruz in the movie “So stupid”. She was also criticized for minorities in Hollywood for “stealing white people’s superheroes.”

Michelle Rodriguez also gets involved in legal disputes several times. She fought with her roommate for which she was also arrested in 2002. However, later her roommate dropped hidden charges.

Moving towards her body measurements, Michelle Rodriguez has a good height of 5 feet 5 inches (1.65m). Her body weight is 57 kg. Her shoe size is 8, her dress size is 2.

Michelle is active in various sorts of social media.