Michelle Veintimilla is a popular Ecuadorian-American actress. She was in a relationship with Eddy Lee. 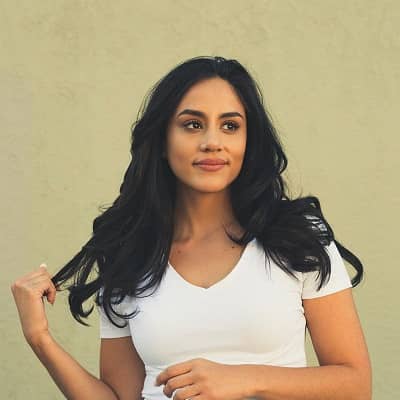 Michelle Veintimilla is currently in a relationship with her boyfriend Eddy Lee. Eddy is also an actor, who primarily works in theater. The two started dating over 3 years ago and made their relationship official through Instagram in September 2018. Their relationship has been going strong ever since and they also show their love for each other through their social media.

Previously, Veintimilla dated Michael Mackenzie McGuire. Their relationship started sometime in 2015 and the two weren’t shy in expressing their love for each other. Things didn’t work out though, and the two broke up sometime in 2017.

Who is Michelle Veintimilla?

Michelle Veintimilla is a popular Ecuadorian-American actress. She is best known for her portrayal of Carmen Guerra in The Gifted and Marie Joblanski in Seven Seconds.

Michelle Veintimilla was born on the 7th of November, 1992. As of now, her age is 28. She comes from Ecuadorian roots and her nationality is American. Also, the young actress’s ethnicity is mixed.

Michelle was born to her mother Maria Veintimilla and her father, whose name hasn’t been disclosed. Young Michelle grew up in New York alongside her younger brother Jose Veintimilla. She was also very interested in theater and acting from a young age which eventually led her to a career as an actress.

Veintimilla graduated from Carnegie Mellon University with a Bachelor’s in Fine Arts.

Michelle started her career in acting back in 2007 with a small role in the TV series One Life to Live. She got her first major role in the theater when she was still a senior in college.

At this time in 2014, she got offered a job in the Broadway musical The Visit. She gained experience and some exposure by playing Chita Rivera in the musical. After this, she portrayed Sarah Branson in Those Who Kill and Michelle in the movie Fathers and Daughters.

Then, she landed another big role in the TV series Gotham in its second season. Michelle played the villain Firefly in the D.C. series in its second and fourth seasons. This role increased her popularity further and established her as a big actress in the industry.

Michelle went on to portray Carmen Guerra in the 2017 series The Gifted. Though she was a guest star on the series, her role was quite memorable and her acting was impressive.

In 2018, the actress landed the role of Marie Joblanski as a series regular in Seven Seconds. This is also one of her well-known roles thanks to the popularity of the series and the importance of her character.

A year later, she appeared in Netflix’s miniseries The I-land as HaydenMore recently, she landed a major role in the 2020s The Baker and the Beauty and the series Big Sky. Michelle also portrayed Rachel in the 2019 movie Drunk Parents.

Michelle Veintimilla hasn’t won any major awards and hasn’t been nominated for her performances as of now. But considering her acting skills and the recent surge in popularity her getting big awards might not be far-fetched.

Ventimiglia’s has accumulated a net worth estimated to be in the range of 1 to 5 million U.S. dollars as of now. She has not revealed anything regarding her annual salary yet.

Michelle Veintimilla stands at a height of 5 feet 6 inches and her weight is roughly 58 kilograms. She looks great and has a slim and attractive figure with body measurements of 33-25-34 inches. Her hair is black and her eyes are dark brown in color.

Get to know more about the lives of actresses Nina Arianda and Elyse Levesque as well.