Pro Golfer on the LPGA player Michelle Wie is married. 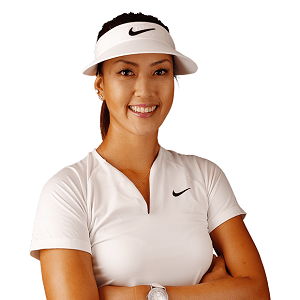 If you expect a bad lie for even one second, the gods will know it and give you a bad lie

It is really important (to win). It's always like, "You should win

Michelle is married to Jonnie West, Director of Basketball Operations. They married on August 10, 2019, at a private home in Beverly Hills, California. The young and beautiful Michelle for sure attracts the attention of many men.

And one of them is Adam Zahn who she has been dating. Adam is a retired basketball player.

Previously, she has also dated basketball player, Robin Lopez in the past. The relationship only lasted a couple of months in 2008.

Who is Michelle Wie?

Hawaii-born Michelle Wie was born is a professional golfer. She turned professional in 2005. Michelle has listed 4 professional wins. It includes all 4 “LPGA Tour” wins. Additionally, she has participated in the “U.S Women’s Open”, “Women’s British Open”, and “Women’s PGA Championship”, and others.

Presently, she ranks 75th in Official Rolex Ranking and 35th in CME ranking.

Michelle was born in Honolulu in the state of Hawaii on October 11, 1989. She is of American nationality and her ethnicity is South Korean.

Her birth name is Michelle Sung Wie. Michelle was passionate about golf from a very young age. She was born to her father, Wie Byung-work, and her mother, Bo Wie.

Her father was a book professor and her mother was an amateur golfer in South Korea. She played golf throughout her high school and college days. She is of South Korean descent.

As per her education, she attended Punahou School in Honolulu in June 2007. Afterward, for her further studies, she enrolled at Stanford University in 2007. Later she graduated from there with a degree in communication.

Michelle initiated her golf career from a young age. She grew her passion for golf during her childhood and high school days. As an amateur golfer, she started at the age of 10.

She became the youngest to qualify for “U.S. Women’s Amateur Public Links Championship”. She won “Hawaii State Open, Women’s Division” in 2002. Similarly, she also won “U.S. Women’s Amateur Public Links” in 2003 and “Curtis Cup” in 2004. This win boosted her career. Eventually, she won several other local titles and events during her amateur career. Afterward, she thought of turning professional in 2005.

In 2005, she turned professional. Afterward, she started touring with tours like “Casio World Open”, “John Deere Classic”, and “Sony Open in Hawaii”. Her first major professional win is the “U.S. Women’s Open” in 2014.  The same year She finished the 2nd in “ANA Inspiration” in 2014. She went on working hard on every other tour.

Wie has won Laureus World Sports Award for Breakthrough of the Year in the year 2004 and Best Female Golfer ESPY Award in the year 2014.

Presently, she earns a massive amount of salary and has an estimated net worth of $12 million.

Michelle has been part of several controversies. Previously, fans criticized the use of an exemption that allowed her to participate in the LPGA tour. According to them, she wasn’t qualified enough to participate. Instead, there could be other golfers who would perform well than her. Presently, there are no other rumors that surround her personal or professional life.