Michelle Yeoh’s relationship status is divorced but engaged. She started her affair with Jean Todt who is a motor racer in 2004.

Then four years later in July, this couple announced that they are engaged.

Before him, she walked the aisle with Dickson Poon in Feb 1988 but they got divorced in 1992. Her ex-husband is an entrepreneur who owns Harvey Nichols and Charles Jourdan.

Yeoh also exchanged rings with a cardiologist named Alan Heldman in 1998. However, this union was also called off shortly.

She from her relationships never had any kids as per the reports. But on her social media, she often posts a picture of two baby girls named Raelyn plus RaeRae. 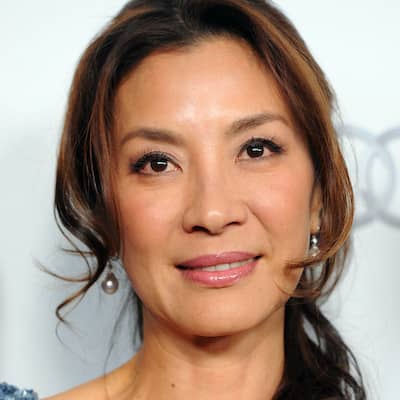 My career in the movie business began in Hong Kong, my heart has always been tied to Asia, and it is immensely gratifying to see international recognition for Asian cinema as a whole

I have been presented with roles with demand not just a physical ability but mental disciplines as well. Memoirs of a Geisha (2005) was not so much about physical exertion... it was much more graceful and contained than that.

Who is Michelle Yeoh?

She is part of upcoming big budgets projects such as The Witcher: Blood Origin, Avatar 3, Avatar 2, and Shang-Chi and the Legend of the Ten Rings.

Her work led her to win the Asian Media Award (1998), the ShoWest Award for International Star of the Year (2001), and the Outstanding Contribution to Asian Cinema (2013).

Her birthdate is 06 Aug 1962 and she was born in Ipoh, Perak, Malaya as Michelle Yeoh Choo-kheng. The name of her mother is Janet Devi and her father was Yeoh Kian-teik.

Her dad was a lawyer, politician who passed away in 2014. Michelle’s ancestry is Hokkien-Cantonese and has two brothers Lam Hoe Yeoh plus Robert Yeoh.

As per her academics, she first attended Main Convent Ipoh. Then she went to the Royal Academy of Dance and achieved her BA degree in Drama.

Michelle Yeoh is mostly known for her appearance in big-screen projects. Her first movie was The Owl vs. Bumbo in 1984 as Miss Yeung.

Her fans are waiting for her future movies named Gunpowder Milkshake, Minions: The Rise of Gru, The School for Good and Evil, Blazing Samurai, Tiger’s Apprentice, and Ark: The Animated.

Moreover, her small-screen movies are,

Her estimated net worth of around $40 million as of 2022. She has not disclosed the details of her salary.

But she is considered one of the highest-paid actresses in Asia.

This Crazy Rich Asians star is keeping herself away from rumors and desperate scandals.

Regarding Michelle Yeoh’s body features, her height is 5 ft 4 inches and her body weight is 55 kg. Moreover, her eyes are dark brown with long hair in dark brown color.