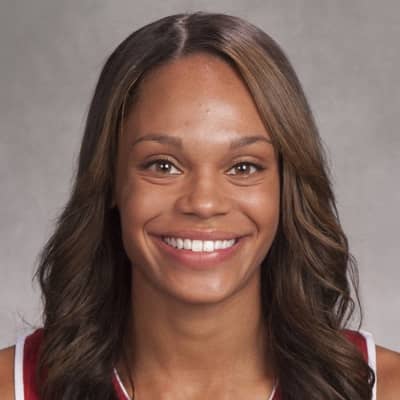 While heading towards the relationship, at present, she is possibly single.

Initially, she was in a relationship with Aaron Ganson. She met him at Bradley University in Illinois, where both of them played basketball. Her Ex-boyfriend, Aaron has plenty of pictures of them together on Facebook. After a few months, they broke up.

Aside from that, she went to try her luck with Matt James. During the season 25 Bachelor finale, Michelle finally got a chance to meet Matt’s parents and she even revealed her past relationship with Matt’s parents.

At last, they didn’t end up sticking together in the end.

Who is Michelle Young?

Michelle Young is an American television personality. Further, she was an elementary school teacher.

She is American by Nationality and she belongs to mixed (African-American) ethnicity.

She is the daughter of LaVonne and Ephraim Young. Young has two siblings and they are Angela and Alex young.

During her early age, she raised with her brother and sister in her hometown Woodbury, Minnesota.

She attended Woodbury High School upon graduation. After, that she joined Bradley University in the year 2011. She graduated with a bachelor’s degree from Bradley in 2015 with a degree in elementary education.

Young Michelle starred at Primary school for teaching after her graduation. Primarily, she began started working for Normandale Hills Elementary School in August 2016 as a 5th-grade teacher. Continuously, she has been engaged there for 4years.

While talking about television personality, she appeared as a contestant on Matt James season of The Bachelor.  Further, she was announced as the lead of consecutive bachelorette season during The Bachelor season 25 After the Final Rose special.

She has an estimated net worth between $500k- $ 1 Million. Her major source of income comes from a TV personality career.

Back when, as a teacher, she made an annual salary of more than $50k.

Young has shared a racism controversy of Rachael Kirkconnell’s. While Rachael appeared on Matt’s season, came under fire in January when her previous actions came to light.

When Matt James broke up with Michelle Young. Back then, she revealed about the present drama surrounding Rachael Kirkconnell’s and Franchise on After the Final Rose.

Further, the TikTok user accused Rachael of liking racist photos. During her college days too, she used to be defended by people. Since that she has apologized and asked people to stop defending her actions. As more details started to come out, Michelle was disappointed and she said that was the main example of not understanding the history behind it. Not only that, she feels like Rachael has a good heart.

However, she thought that she has to learn more and more and it comes very inconsiderate. She addresses Franchise’s Diversity Controversy after ‘Bachelor’ Exit.

In addition, she has a black complexion with long brown hair. Her eyes are hazel in color.

While talking about her social sites, she has a myriad of followers on Instagram with 437.6k followers. In contrast to that, she is not active on other social media.