Updated On November 15, 2022 | Published By: Chirlot Sharma
Share this
Married 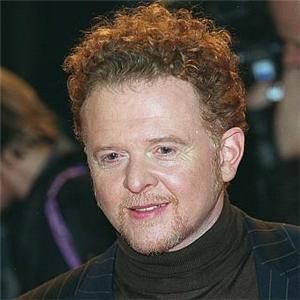 Celebrity is a fascination with a fake plastic image

I am in this business for the music. The whole fame and celebrity stuff is the bit that I've always been uncomfortable with

I was a soul boy before I was a punk. James Brown and Motown - we related to it because we were kind of blue collar.

What is the relationship of Mick Hucknall?

Hucknall is a married man and is married to Gabriella Wesberry in 2010. The couplet has a beautiful daughter,  Romy True Hucknall. He is happily living with his family and enjoys most of the quality time in Ireland.a

Before marriage, Hucknall has been dating actresses, models, and singers.

Who is Mick Hucknall?

Mick Hucknall is a British singer, and songwriter. musician and best known as a lead singer of a Band called Simply Red. He enjoyed great success with this band and sold over 50 million albums from 1983 to 2009.

Mick Hucknall was born on June 8, 1960, at St. Mary’s Hospital, Manchester, England. He was raised by his father Reginald after being abandoned by his mother, Maureen at the of age 3. His father was a barber in Stockport.

He was educated through Audenshaw School. Furthermore, his mother returned home in the mid-1990s whom he has seen only twice after she left him.

Hucknall is of British nationality and of Irish, Basque and Ashkenazi ethnicity.

Mick Hucknall started his music career after joining Frantic elevators in the late 1970s. He has recorded four singles with this band including a version of Holding  Back The Years. Later he became the lead singer of Simply Red in 1983.

Here he has recorded various songs including a revised version of Holding Back The Years which eventually topped the chart in the US and reached no. 2 on the UK chart.

Mainly this song and other albums like Fairground” and ”Tribute to Bobby” among the others established as a successful singer in the music industry.

Besides singing, he is active in politics and is a supporter of the UK Labour Party since the 1997 general election where he supports Tony Blair’s leadership.

Furthermore, he was among the guest on BBC’s political discussion series Question Time where he raised his voice support for same-sex marriage.

He has earned a lot in his illustrious career in singing and songwriting and politics. So he is estimated to have a net worth of $60 million.

Back in 2012, Hucknall shocks everyone in an interview with The Guardian saying that he has slept with 3000 women for three years in the mid-80s because he wanted to get love from every woman which he didn’t get from his mom.

Finally, he admitted that in doing so he never got emotionally attached to them that he craved for.

Hucknall has rare red-colored hair and blue eyes. He is 5ft 11 inches tall. Furthermore, there is no information regarding his height and other body parts.

Mick Hucknall is highly active on social media. He has over 1.5 million followers on Facebook and over 67.4k followers on Twitter. Furthermore, he is not active on Instagram.

Also get to know more about the birth facts, education, career, net worth, rumors, height, and social media of different personalities like Cade Larson, Amy Grant, and Richard Marx.