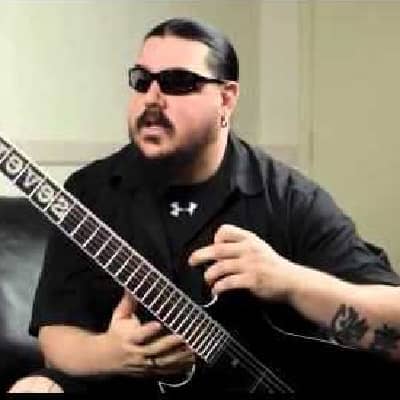 Mick Thomson is a married man. He exchanged vows with Stacy Riley on 05 Oct 2012. His wife often poses with her for pictures.

Who is Mick Thomson?

Mick Thomson is an American musician. He is a guitarist who is associated with a heavy metal band named Slipknot.

He was born as Mickael Gordon Thomson on 03 Nov 1973 in Des Moines, Iowa, US. The names of his father and mother are not yet disclosed.

But he has a brother named Andrew. Moreover, his ethnic background and academics are also behind the curtain.

Mick Thomson is an amazing guitar player. He is currently playing with a heavy metal group Slipknot which he joined in mid-1996. This group has released several music albums.

This group’s latest albums was We Are Not Your Kind which was released in 2019. Mick has also teamed up with others to release other musical projects. With Malevolent Creation, he brought Deliver My Enemy (Doomsday X) in 2007 and also played guitar for Necrophagia in 2011.

This Slipknot’s member has an estimated net worth of $1 million as of the year 2020. But his salary and other earnings are unknown.

This guitarist is keeping himself away from rumors. He is also away from any type of scandal.

But in March 2015, he along with his brother were caught up in a knife fight. Mick suffered from a head injury but it was not life-threatening. This incident happened outside a house in Iowa.

Later after investigating, it was found bot the brothers were responsible for the fight and they were charged with disorderly conduct.

Regarding Mick Thomson’s body features, his height is 6 ft 2 inches and his body weight is average size. The color of his eyes is probably light brown and his hair is black in color. He often wears black goggles.

His left arm has a tattoo of the number 7 and he has inked the Japanese language of Hope on his right hand.

Moreover, his Facebook page is followed by more than 94k people.