Mickie James is a professional wrestler and actress from America. She is married.

The veteran wrestler is a married woman. Back in 2007, she got engaged with fellow wrestler Kenny Dykstra. However, it didn’t work out and the pair split up.

Additionally, the couple got engaged in December 2014 and tied their knot on December 31, 2015. Since their marriage, there has not been a single rumor of an extramarital affair and boyfriend of her.

Besides this, she has never seen anyone in the public and media. So far, Mickie and Magnus have maintained a perfect relationship. Currently, the lovely pair is living elegantly. 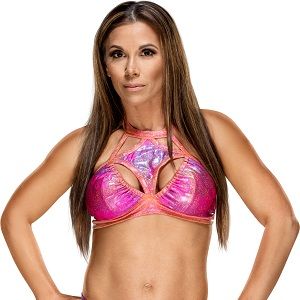 This is a shining example of never quit, never give up, &

My New Obsession... is YOUR DESTRUCTION!!

I think that I'm just the same, but there is sometimes that you just have to be real. You have to look in the mirror and be real with yourself and you have go: 'You know what? I am the best in the world. What is happening?'

Who is Mickie James?

Mickie James is a professional wrestler and actress from America. She is also a model and country singer. As a singer, she has released two albums in her musical career, Strangers & Angels, and Somebody’s Gonna Pay.

During her WWE career, she has won WWE Women’s Championship five times and received her first Divas Championship at Night of Champions in 2009. Moreover, Mickie has also trained WWE NXT’s female wrestlers.

Mickie was born on August 31, 1979, in Richmond, Virginia, United States. She is the daughter of Stuart James and Sandra Knuckles.

Furthermore, her father is a retired wastewater-treatment worker and her mother was a teacher and real-estate agent. Talking about her childhood, it was not so easy as her parents got divorced when she was too young.

Besides this, she has six siblings of which three are stepbrothers. Mickie grew up in Montpelier, Virginia. Concerning her education, she completed her graduation from Patrick Henry High School in 1997.

Mickie began her career on the independent circuit in 1999, as a valet for KYDA Pro Wrestling. She played her first match with Jake Damian against American Mike Brown and Candie in an intergender tag team match.

Soon after that, she returned to TNT. On her second spell with TNT, Mickie won 3 TNA Knockouts Championship titles and TNA World Cup 2013 with team USA.

Moreover, she again left TNT in 2013 although she still had a contract with the company. After that, she returned to Independent Circuit. In January of 2015, she made a surprise return to TNT for the second time.

Currently, she is associated with both TNA and Independent Circuit. Besides wrestling, Mickie had a keen interest in music from a very early age. So far, she has released two albums; “Strangers & Angels” in 2010 and “Somebody’s Gonna Pay” in 2013.

Apart from singing and wrestling, the legendary wrestler has also been interested in horse riding from a very young age. Currently, she owns 3 horses named Bunny, Casanova, and Rhapsody and two dogs.

She revealed that she “would love” to win a men’s championship as well. Being a successful wrestler, Mickie earns a handsome amount of money from her profession. Currently, she has a net worth of $4 million as of 2022.

So far, Mickie was honored the by the Native American Music Awards (NAMA) Hall of Fame. Apart from that, she has also won several wrestling championships.

Once, Mickie faced controversy as she was in a relationship with John Cena. Again, Mickie’s feud with Stratus would create controversy.

In WrestleMania 22, she was dragged into a controversy as she touched badly along with some bad gestures.

Being a wrestler, Mickie has a perfect physique. She has a height of 5 ft 4 inches and weighs 61 kg.

Moreover, she has beautiful brown eyes and brown hair. Furthermore, her bra size is 36D, waist size is 27 inches, and hips size is 37 inches.

Additionally, Mickie has more than 815k followers on Twitter.

The professional wrestler, Nikki Bella has initiated the new love life with Artem Chigvintsev! Has she moved on from her ex-lover John Cena?