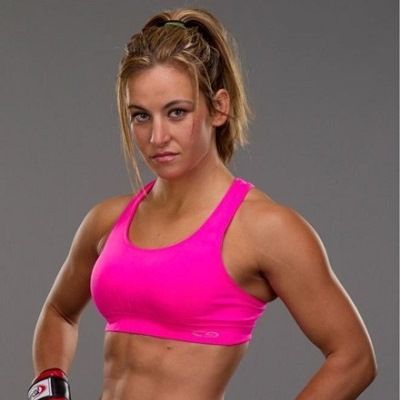 It's not my time right now, I've been doing this for over a decade, thank you so much for being here, I love this sport forever but it's not my time anymore.

What is the relationship of Miesha Tate?

In 2014, Miesha also saved Bryan’s mom, Chris Caraway’s life when Chris got an asthma attack when she was scuba diving.

But, they broke up and she is single.

Who is Miesha Tate?

Also a former mixed martial artist, Miesha Tate had competed in the Ultimate Fighting Championship and is a former UFC Women’s Bantamweight Champion.

Who are the parents of Miesha Tate?

Miesha Tate was born in Tacoma, Washington, United States on August 18, 1986. Her birth name is  Miesha Theresa Tate and she is currently 33 years old.

Her father’s name is Rob Tate and her mother’s name is Michelle Tate. She grew up as a tomboy and used to socialize and play with the boys in her neighborhood.

Miesha Tate has a sister namely, Felicia Martin. Miesha holds American citizenship, but her ethnicity is unknown. Her birth sign is Leo.

Talking about Miesha’s education history, she did her schooling at Franklin Pierce High School, where she took part in amateur wrestling. Later, she attended Central Washington University.

Talking about her profession, Miesha made her professional debut in mixed martial arts, at the one-night HOOKnSHOOT Women’s Grand Prix. She did well initially, defeating Jan Finney, but was later beaten by Kaitlin Young, who eventually became the tournament champion.

Throughout the next few years, she took part in fights in several small organizations and won a few. Her victories included defeating Jamie Lyn Welsh in CageSport MMA and Jessica Bednark in Freestyle Cage Fighting (FCF). She faced Maiju Kujala in her first round who she managed to defeat. In the final, she defeated Hitomi Akano, to become Strikeforce Women’s Bantamweight Tournament Champion. Later, she fought and defeated Marloes Coenen, to become the new Strikeforce Women’s Bantamweight Champion.

Whereas, her first title defense took place against Ronda Rousey, who had made her MMA debut in early 2011.  In February 2013, she finally joined the Ultimate Fighting Championship (UFC). She made her UFC debut in April 2013 and took on Zingano in the Ultimate Fighter 17 finale.

Later, after Zingano decided to withdraw as Rousey’s opponent because of a knee injury, Miesha Tate was replaced by Tate. In the following year, Miesha faced Liz Carmouche on the 19th of April 2014 at the UFC on Fox: Werdum vs. Browne event. The fight resulted in a victory for Tate, which was also her first win in the UFC. She next faced Rin Nakai, a newcomer at ‘UFC Fight Night: Hunt vs. Nelson in September.

In January 2015, Tate surprised the MMA community by out-grappling McMann, who was an Olympic medalist. The fight resulted in a victory for Tate, after which she was declared a top fighter by FoxSports.com. Holly Holm defeated Rousey for the UFC Bantamweight Championship in November 2015.

In December 2016, Miesha Tate announced her decision to retire from MMA after spending a decade in the field. Miesha made an appearance in ‘Fight Life’, which was a full-length documentary on mixed martial arts. Directed by James Z. Feng, the film focuses on the lives of MMA fighters and shows what it takes to be a modern-day professional fighter. The film won an award for ‘Best Documentary at the United Film Festival.

How much is the net worth of Miesha Tate?

Miesha Tate has an estimated net worth of around $6 million as of 2022, and she has earned that sum of money from her professional career.

Miesha Tate has a height of 5 feet 6 inches and she weighs is 61Kg.

Additionally, she has a measurement of 37-25-36 inches and her bra size is 34C. Miesha’s hair color is dark brown and her eyes color is hazel. Furthermore, her dress size is 8 (US) and her shoe size is 8 (US).

Miesha Tate has an unexpected delivery on the bathroom floor!

Here Are Things You Need To Know About The American Comedian And Singer Bo Burnham!! His Growing Career, Dating History, Family Life And Much More