Mika Abdalla is a well-recognized film and television actress. 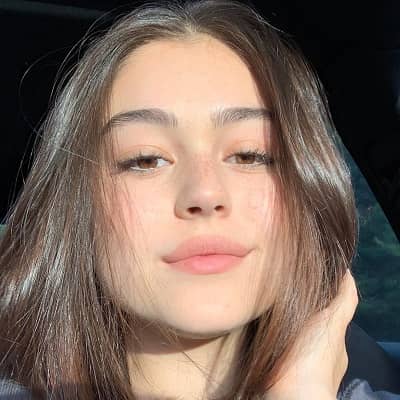 Mika Abdalla is presently single and she is not dating anyone right now.

However, it is reported that she was in a relationship with Nicholas Stevens. Their relationship details are still behind the curtains. Moreover, it is still unknown when they started dating each other.

Also, their separation date is still not stated in the public.

Who is Mika Abdalla?

Mika Abdalla is a well-recognized American film and television actress. Abdalla is widely famed for her role as McKeyla McAlister that is featured in Netflix’s ‘Project Mc2.

Also, she has emerged on the 2010 television series Fun to Grow On and in the 2013 movie, Saige Paints the Sky.

Mika Abdalla was born on 13 May 2000. Presently, her age is 21 years old. Likewise, her birthplace is Plano, Texas, the USA.

She is the daughter of her father, George Abdalla whereas her mother is Pam Rene Abdalla.

Talking about her nationality, Mika holds an American identity whereas her ethnicity is mixed (Lebanese, Bulgarian, Greek, and Italian).

Regarding education, the star currently pursues her education at the University of California Los Angeles. Also, she enjoys her leisure time by doing horseback riding.

The juvenile actress, Abdalla started her professional career in the year 2008. She featured in PBS’s popular children’s television series ‘Barney & Friends ‘. There she played the role of Jill. Following her debut, Mika played in the educational television series entitled, ‘Fun to Grow On’. In the show, she emerged in the two episodes.

Likewise, Abdalla started her cinematic debut in 2012, in the psychological horror ‘Tinsel’. She portrayed the younger version of the prime supporter, Sarah. Also, she played in the short film ‘Departure’, comedy-drama ‘A Woman’s Worth’, musical-comedy ‘The Fandango Sisters’, and short film ‘Hemera’s Eclipse’.

In the year 2013, Mika starred in only one project, a television movie entitled, ‘Saige Paints the Sky’. Next year, she featured in the family drama ‘Summer’s Shadow’ in the role of Vanessa. The famed actress started her 2015 with the short film ‘Shattered Reflection’.

The greatest moment of her career came when Mika portrayed the character of Mckeyla McAlister in Netflix’s ‘Project Mc2 ‘. The series was produced by DreamWorks Animations’ AwesomenessTV and MGA Entertainment and it began featuring on 7 August 2015.

Abdalla has earned decent money from her profession working as a film actress as well as a Television actress. She started working in the acting industry at her early age.

It is reported that Mika Abdalla has an estimated net worth of $1 million. Additionally, she receives $20 k per episode as her salary from her series.

However, she has not disclosed her exact earning, incomes, and assets details to the public till now.

It is surprising to know that Mika, 21 years old star personality has never been part of any controversial matter or rumors till now.

Further, it seems that she wants to enjoy her private life and does not want to merge it with her professional life.

Beautiful star, Mika Abdalla has gorgeous looks as well as a charming personality. Abdalla stands at a height of 5 feet 5 inches. She has a balanced weight of 55 kg.

Furthermore, the actress has brown hair as well as brown eyes.

She is also active on Twitter with more than 2.8 k followers.

Moreover, Abdalla is also available on Facebook with nearly 4.7 k fans and supporters.