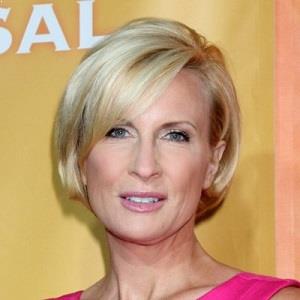 I think women have a hard time not apologizing their way into negotiations. We tend to back in to these conversations in a self-deprecating and ultimately self-defeating way.

Mika Brzezinski was once a married woman. She was previously married to TV news reporter James Patrick Hoffer. The couple first met when both worked at WTIC-TV. They have two daughters named Carlie Hoffer and Emilie Hoffer. Hoffer and Brzezinski divorced in 2016. After that, she engaged to American politician and her co-host Joe Scarborough in early 2017. The couple has been engaged for a few months now and their relationship is going very well.

Who is Mika Brzezinski?

Mika Brzezinski is an American television host, journalist, and author. In addition, she is also a political commentator. She currently works as the host of MSNBC’s weekday morning broadcast show, Morning Joe. Before that, she worked as a CBS News correspondent. At that time, she was the reported of their principal “Ground Zero“.

Mika Brzezinski was born on 2 May 1967, in New York City, New York, USA. Her birth name is Mika Emilie Leonia Brzezinski. She is the daughter of Zbigniew Brzezinski and Emilie Benes Brzezinski. Her father is a former National Security Advisor. He also taught at Columbia University.

She has a brother named Mark Brzezinski who was the United States Ambassador to Sweden from 2011 to 2015. Her another brother Ian Brzezinski is a military expert. She spent most of the time of her early life and childhood with her family. She is an American by nationality and belongs to Czech, Bohemian, and Polish ethnicity.

For school education, Mika attended the Madeira School. After that, she attended Georgetown University. Shortly, she shifted to Williams College in Williamstown, Massachusetts. From there, she graduated with a Bachelor of Arts degree in English in 1989.

Mika began her journalism career in 1990.  She first worked as an assistant at ABC’s World News This Morning in 1990. The following year, she moved to Fox affiliate WTIC-TV/WTIC-DT in Hartford, Connecticut to work as their general assignments reporter. After that, she joined CBS affiliate WFSB-TV/WFSB-DT in Hartford in 1992. She then became its weekday morning anchor in 1995. She joined CBS News in 1997 as a correspondent and as an anchor for the overnight Up to the Minute news program.

Mika also worked for MSNBC on the weekday afternoon show, HomePage at the same time. In 2001, she returned to CBS News as a correspondent. After working there for six years, she returned to MSNBC in January 2007. Since then, she works as an occasional anchor for many MSNBC shows. She is also the co-host of MSNBC show, Morning Joe.

In addition to Journalism, she is an author. She has published three books till now. Her first book is All Things at Once (2010). Her second book Knowing Your Value: Women, Money and Getting What You’re Worth was published in 2011. She published her third book, Obsessed: America’s Food Addiction and My Own in 2014. She has an annual salary of $2 million and a net worth of 12 million dollars.

During the 2016 presidential campaign, Mika called Trump’s presidency “fake and failed” and tweeted against Trump several times. After that, Trump unfollowed Brzezinski and Scarborough on Twitter. In June 2017, Trump tweeted “low I.Q. Crazy Mika” and said that she was “bleeding badly from a face-lift”. After that, Mika and Joe accused the White House of threatening to blackmail them with an exposé in a tabloid magazine. Currently, there are no any rumors of her love affairs.