Mikaila Ulmer is possibly single. She hasn’t introduced anyone as her boyfriend. Presently, she is more focused on her studies and career. Also, she is enjoying her teenage life. 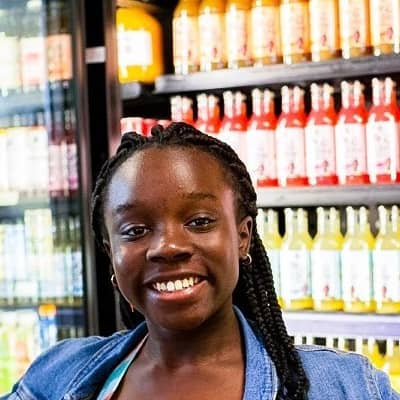 you need to know your numbers! Understand what profit is! Creating a budget and Estimating your income!.

Don't be discouraged by life's little stings, get back up and spread your wings.

Who is Mikaila Ulmer?

Mikaila Ulmer is an American teen entrepreneur, philanthropist, public speaker, and student. She is widely recognized as the founder of  “Me & The Bees Lemo”, a company that produces award-winning, refreshing, and sustainable natural lemonade. As of 2021, her lemonade is stock in over 1500 stores across the US.

Mikaila is the daughter of D’Andra Ulmer and Theo Ulmer and both have business degrees. She has also a younger brother. Ulmer is attending St. Stephen’s Episcopal School in Austin, Texas.

Mikaila started her business at the age of 4 from her house where she sells her great grandmother’s 1940s recipe lemonade and local honey in front of her house. She proposed her first retail placement to a local pizza shop. As the business grew her parents became involved and Ulmer has donated 10% of the profit to charities.

In 2015, Ulmer was invited to the television show Shark Tank, a business reality television show along with her father. In the show, she received $60,000 from Daymond John to support her growing business. The same year, she was also invited to meet former President Barack Obama at the White House. A year later she introduced him at a women’s summit. Similarly, her business received $800,000 as an investment from a consortium of football players.

Her lemonade sells over 360,000 bottles in a year with stockists including upmarket supermarket chain Whole Foods Market. Furthermore, she leads a workshop on how to save honeybees and she has featured as a panelist at several conferences like SXSW ECO, SXSW EDU, and SXSW Interactive.

At the age of 16, she has built a great empire. She stays a mile away from such controversial acts that could create a huge buzz in the media. So, she hasn’t been part of any sorts of rumors and scandals to date.

Mikaila is the founder of a multi-billionaire company so obviously, she has accumulated an impressive amount of wealth from her business. However, she hasn’t yet disclosed her actual net worth and other income in the media.

The 16 years old entrepreneur seems quite tall in the photo with an average weight. However, her actual height and other body measurement are still under review. She has black pair of eyes color with black hair.