Mikayla Nogueira is in a romantic relationship with her boyfriend, Cody. On March 22, 2021, she showed off the sweet gifts she received from her boyfriend asking her to be his girlfriend. 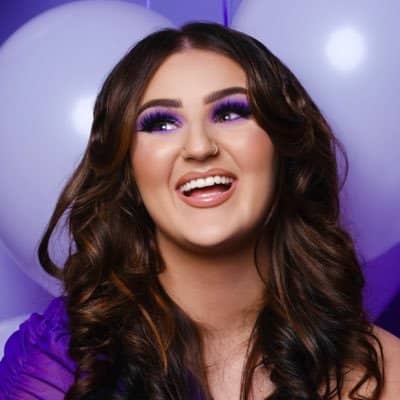 Who is Mikayla Nogueira?

She is most popular on her Instagram handle and Tiktok Profile. She is also recognized for her intense beauty, makeup tutorials, and charm on her Social Media accounts.

Mikalya Nogueira was born on June 13, 1998, in Massachusetts, the U.S. Her full name is Mikayla Jane Nogueira.

Her mother Patrice is an artist and an elementary school counselor and her father’s name is Michael Nogueira. Mikalya has a good relationship with her parents. She has a brother who is 3 years older than her. Nogueira spent her childhood days in East Freetown, Massachusetts.

She holds an American nationality and her ethnicity is Portuguese. Her birth sign is Gemini.

Regarding her education, she graduated from Apponequet Regional High School in 2016 and was a member of DECA in high school.

Nogueira graduated with a Bachelor of Arts in communications in 2020 from Bryant University. She dropped out of college to pursue her career in the media platform.

Mikayla Nogueira started her social media career with a huge interest and passion. First, in 2013, she started posting content on the app Tumblr.

However, she didn’t get much attention on the platform. In March 2020, she started uploading videos on Tiktok. Immediately, she gained a lot of attention on social media.

Currently, she is surrounded by more than 13M followers on her @mikaylanogueira Tiktok account. In her Tiktok account, she has already collected more than 900.2M overall likes. Similarly, she has endorsed or promoted various brands which add to her income.

In late 2020, she got employed by Ulta Beauty as a beauty advisor. After collecting some experience, she started her own brand, Mikayla J Makeup.

In December 2020, she became the recipient of an American Influencer Award for Emerging Makeup Artist of the Year.

Speaking of her income, she makes a decent sum of money through her social media presence. She has an estimated net worth ranging from $2M.

She is one of the most successful media stars in America who gained huge fame and wealth from social media.

There are no rumors and controversies about her personal or professional life. According to her, she was bullied throughout grade school and received slurs like “tranny.”

She was also criticized for her “Boston accent” and several critics claimed that she talks differently.

Nogueira has a decent height and her weight is moderate. Similarly, her eyes are of hazel color, and she has long dark hair. Likewise, there is no information regarding her body measurements.

Mikayla is quite popular on social media. She has around 426k followers on Instagram and over 16.8k followers on Facebook. Likewise, she also has a Twitter account with 2k followers and Tiktok with over 13.1M followers.