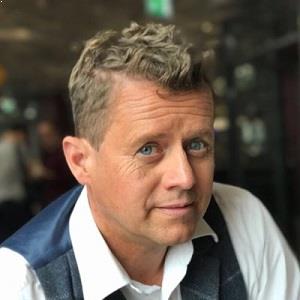 Mike Bushell is a married man. He is married to his one day girlfriend, Emily, 39. They say when you know, you know. The same is the case with this couple, they got married the very next day after dating. Both of them knew that they met the one. They married in May 2019 in Hampshire.

He has previously married to his childhood sweetheart, Kim Bushell. However, the marriage did not work out and they soon divorced after 16 years of their married relationship i.e, in 2009. The pair has three children: Lucy, Isabel, and Sophie from the relationship. He has not been involved in any relationships since the divorce.

Who is Mike Bushell?

Mike Bushell is a British sports presenter for the BBC. Currently, he works as the presenter on ‘BBC Breakfast’ on Fridays and on the weekends. Additionally, he also has his own web page: ‘Bushell’s Bes’.

Currently, he is one of the contestants in Strictly Come Dancing 2019.

Bushell was born in the United Kingdom on December 11, 1965. Throughout most of his childhood years, he grew up in Hertfordshire.

He wanted to become a zookeeper in his childhood days. He is of British nationality and his ethnicity is English.

Mike started his own newspaper, the Daily Owl when he was just eight years old and he used to sell it to his friends. During his childhood, he also played chess. And when he was young, he aimed to be a zookeeper or field biologist.

Talking about his education, Bushell attended Ashwell School. Later, he went to secondary school at Granby High School after moving to Harrogate. Additionally, he received a 2:1 in a drama and television degree at King Alfred’s College. Furthermore, he also attended the National Youth Theatre.

Bushell initially worked on the BBC Radio Solent as a trainee reporter. Now, he is one of the famous sports presenters around. Currently, he works for the BBC and hosts a show ‘BBC Breakfast’.

Additionally, he has also worked on ‘BBC South Today’. He set the world record for traveling across the water in a large inflatable ball in 2012. He took part in ‘And They’re Off!’ in January 2018.

Apart from his work on television, Bushell also authored the book titled ‘Bushell’s Best Bits’, which was released on June 2013. Additionally, he also appeared on ‘Celebrity Mastermind’ on 28 December 2013.

Furthermore, in 2010, he played the role of a sports reporter in Aladdin in Northampton. To date, he has appeared in numerous other shows including ‘Breakfast’, ‘Celebrity Chase’ and ‘Paralympic Games’ among others.

Mike Bushell’s Salary, and Net Worth

Bushell’s income is estimated to be around £150,000 and £1.8 million. From the show Strictly Come Dancing, he earns around £25,000 per episode. Furthermore, there are no details regarding his net worth at present.

Bushell became part of the news after he fell on a swimming pool during a live interview in 2018. At present, there are no rumors concerning his life and career.

Talking about his body measurement, Mike Bushell has a height of 5 feet 5¾ inches (1.67 m). Additionally, his hair color is blonde and eye color is blue. His shoe size is unknown.