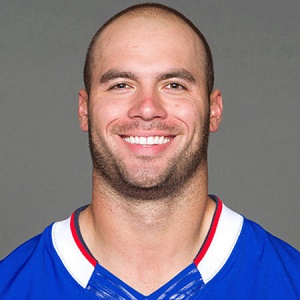 Mike Caussin’s marital status is married. Mike Caussin got married to Jana Kramer on May 22, 2015. The couple has one daughter named Jolie Rae Caussin. But unfortunately, the couple separated. The reason for the split is the sexual escapades of Mike Caussin. However, they have not divorced or separated legally. But after some time, the couple reunited.

Recently the couple has shared a news that Jana is expecting a baby after trying so hard with her husband. They had several miscarriages before she became pregnant so the couple is waiting for the baby’s arrival.

According to Jana, Mike is a sex addict always in search of women to satisfy his basic urges. Other information related to his affairs, girlfriends and past relationships are not revealed.

Who is Mike Caussin?

Mike Caussin is an American football tight end. He is best known as a Football Player.

Mike Caussin was born on February 26, 1987, in Springfield, Virginia. His nickname and birth name are not revealed. Name and Profession of his mother as well as a father are not revealed. He has no any siblings.

The information related to his childhood is not revealed. His nationality is American. His ethnicity is unknown.

Talking about his career, he joined the team as an undrafted free agent. He joined their practice squad to practice with the team. In 2014,  they started to sell in Washington Redskins. He retired from the sport after a spate of injuries in 2014.

He was a clean tackler during his stint with all the teams. He has been a role model for the younger generation. Buffalo Bills brought him from the Jaguars in December 2010. The Washington Redskins on July 21, 2014. Jacksonville Jaguars signed him in 2010.

There was a rumor that Mike Caussin and Jana Kramer got divorced but it’s not true.