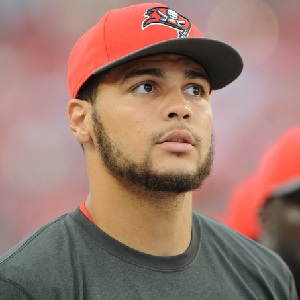 My daughter MacKenzie is so important to me. I have a tattoo on my arm for her. My roommate gave me the name for her

Only God can change a season of war into a season of peace. Would you agree with me in prayer for peace?

I am also praying for you, my beloved partner. God has a miracle breakthrough for your life.

Mike proposed to his Wife on her B-Day!

Mike Evans is a married man. He is married to his longtime girlfriend, Ashli Dotson. The couple tied the knot on February 13, 2016, at the Corinthian in Houston, Texas.

After the wedding, the newlyweds went to Bora Bora and Moorea for the honeymoon.

He has a daughter, Mackenzie Evans.

He is living happily with his wife and daughter.

Who is Mike Evans?

Mike Evans is an American football player. He currently plays as a wide receiver for the Tampa Bay Buccaneers of the National Football League (NFL).

He played college football at Texas A&M, where he earned consensus first-team All-American honors after recording a school record of 1,394 receiving yards on 69 receptions.

Mike was born on August 21, 1993, in Galveston, Texas, USA. His parents are Heather Kilgore and Mike Evans Jr. His nationality is American but his ethnicity is multi-cultured.

He attended Ball High School in Galveston, Texas, where he played basketball, football, and ran track. In basketball, he averaged 18.3 points, 8.4 rebounds, and 5.2 assists as a senior.

Evans only played football during his senior year, earning second-team District 24-4A honors after making 25 receptions for 648 yards and seven touchdowns. After high school, he attended Texas A&M University, where he played for the Texas A&M Aggies football team from 2011 to 2013. He received Freshman All-SEC honors from the league’s coaches during his college football career. In 2013, he received AT&T ESPN All-America Player of the Week honors.

Mike began playing football at a professional club level in 2015. He was drafted by the Tampa Bay Buccaneers in the first round with the seventh overall pick in the 2014 NFL Draft. On June 12, 2014, he signed a four-year rookie contract worth $14.6 million, with an $8.96 million signing bonus.

What is Mike Evans’s net worth?

In 2018, he was signed by Tampa Bay Buccaneers for a five year contract worth $82.5 million.

His net worth is $25 million according to the sources.

How tall is Mike Evans?

He has a height of 6 feet 5 inches with a bodyweight of 105 kg. He has black hair color and his eye color is brown.

Jana Kramer Reveals How She Blew up Her Chance of Dating Chris Evans after an Embarrassing Bathroom Incident!