Mike Fisher is an NHL player who played for Ottawa Senators and Nashville Predators. Mike is married to a country singer, Carrie Underwood since 2010 and has two children.

Mike Fisher is a married man to Carrie Underwood on 10th Jul 2010. Carrie has a beautiful voice and is a country singer.

The couple is blessed with two children. Their first baby Isaiah Michael Fisher was born on Feb 27, 2015. Again in Jan 2019, Carrie gave birth to another child, a son named Jacob Bryan. 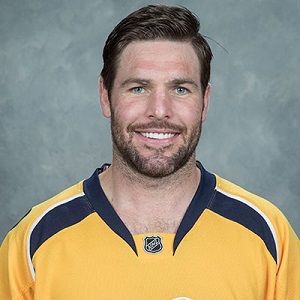 We know we're going to go through ups and downs and we've all experienced that, but it's about surrendering some of that control, which we all find so hard to do, but it's really freeing when you can do that

One of my favorite scriptures is Proverbs 3:5-6: "Trust in the Lord with all your heart and don't lean on your own understanding. In all your ways acknowledge Him and He will direct your path." That's a perfect example of trust. Sometimes you can trust and hope that everything is going to be rosy and God doesn't promise that. He promises that He's got our backs and He's prepared a place for us

Hopefully, I can be a good light in the hockey world and promote faith as something that's really real.

Who is Mike Fisher?

Mike Fisher is a professional ice hockey player. He plays for the  Nashville Predators of the National Hockey League (NHL).

Earlier, he had played for the Ottawa Senators who drafted him 44th overall in the 1998 NHL Entry Draft.

He was born Mike Andrew Fisher on 5th June 1980 in Peterborough, Canada, the son of Jim Fisher (father) and Karen Fisher (mother).

He has a sister, Meredith Fisher, and two brothers: Gregory Fisher and Rob Fisher.

He belongs to Canadian and American nationality and his ethnicity is  English, Scottish, Irish, and German.

Besides this, there is no information regarding his childhood and education.

Mike Fisher had started playing hockey in the Peterborough Minor Hockey Association (OMHA) with the rep Minor Petes program. He was drafted in the second round, 44th overall, by the Ottawa Senators in the 1998 NHL Entry Draft.

In 1999-2000, he had even debuted with the Senators and recorded 9 points in an injury-shortened 32-game rookie season. Then he had played overseas for EV Zug in the Swiss Nationalliga A from the year 2004-2005.

Likewise, he had emerged with 22 goals and 44 points, providing valuable secondary scoring for the Spezza-Heatley-Alfredsson line from 2005-2006. The next year (2007), he had even helped the Senators to the 2007 Stanley Cup Finals, where they fell short to the Anaheim Ducks in five games.

Mike was traded to the Nashville Predators in exchange for the Predators’ 2011 first-round draft pick in 2011. In the same year (2011), he had played his first game with the Predators and scored an assist in a 5–3 win over the Colorado Avalanche.

Furthermore, he had announced that he intended to end his retirement to help the Predators make another Stanley Cup run in this year (2018).

This talented player has earned a net worth of around $30 million as of 2022, from his sports career.

His contract with Nashville Predators was signed for $1 million per annum.

There are rumors that he and his wife Carrie Underwood are getting divorced after their 8 years of their marriage.

Mike Fisher has dark brown hair and has a pair of attractive blue eyes. His height is 6 feet 1 inch and weighs 98kg. Apart from that, there is not any information regarding his other body measurements.