Renowned for hosting the talk show with Fox Soul and Fox Sports.

Mike Hill is married to Cynthia Bailey. His wife is a model and reality Star renowned as the cast of The Real Housewives of Atalanta.

The wedding took place at the Governors Towne Club in Acworth, Georgia. At the wedding, the bride wore the wedding gown by Nneka C. Alexander.

The guests of the wedding include the RHOA co-stars Kenya Moore, Eva Marcille, Porsha Williams, and Sheree Whitfield. 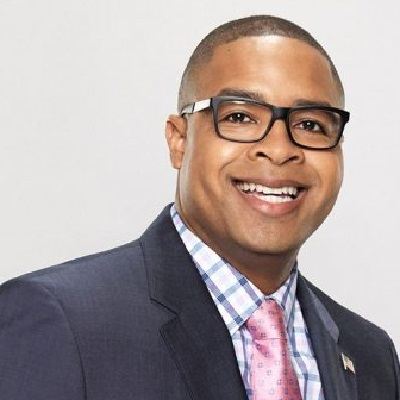 Who is Mike Hill?

American Mike Hill is a sportscaster and TV Personality. He is renowned for hosting the talk show with Fox Soul and Fox Sports.

Details about his father and mother are not disclosed.

During his childhood, he spilled his time between the Bronx and Bessemer. He has a brother, J.R. Hill. He completed his High School education at a local school in Alabama.

After that, he was enlisted as a reservist in the U.S Air Force.

In 1995, Mike Hill started his career as a sports director of WHAG-TV. However, he left the TV for less than a year. After that, he joined the KSEE-TV as a sports anchor.

In 1997, he left the TV channel to join the WKRN-TV as a sports anchor. For the channel, he worked for three years. After that, he became the host and anchor for Fox Sports Net based in New York.

In 2002, he became the Sports Anchor for KXAS-TV in Dallas, Texas. Along with the channel, he was associated with the company for two years.

Besides that, he hosted a wide variety of show including SportsNation, SportsCenter, NFL Live, and many more. Hosting such programs, he spent 9 years of his career.

In July 2013, he joined Fox Sports. Since then, he is hosting the show, America’s Pregame and Keeping It Real With Mike Hill.

Besides that, he hosts the various shows of Fox Sport 1 including FOX Sports Live, FOX Football Daily, UFC on Fox, and Fox College Basketball.

In 2019, he hosted the Netflix show, Hyperdrive for Netflix. Also, he is hosting the Mike and Donnie Show for Foxoul. TV

Talking about net worth, his wife, Cynthia Bailey has an estimated net worth of $2.5 million. Her net worth is attributed to her career as an actress.

Mike Hill has black eyes with black hair. He stands at a height of 6 feet 2 inches and weighs around 82 kg. His body measurements are 44-34-3 inches.