Mike Holmes is a professional contractor/builder who has experience of over 35 years in the industry. Mike runs and hosts his own TV show, Holmes on Homes with his children. 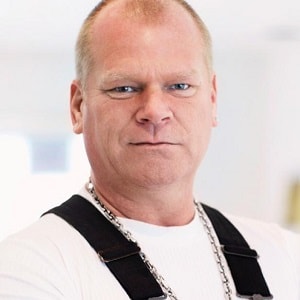 [on 'Holmes Makes it Right'] It isn't just about a television show and teaching people. It's about so many different things to do with the environment of your life, your home, your family. It's about the next generation. If we start teaching why we do things a certain way, as opposed to how, we're going to have a much better generation of contractors out there.

What is the relationship of Mike Holmes?

Mike Holmes is in a relationship with Anna Zappia and they have been dating for over two decades.

Mike was previously married to Alexandra Lorex in 1982. Mike was 19 when he wed her. They have three children, Sherry Holmes, Amanda Holmes, and Mike Holmes Jr.

In 1993, Mike and Alexandra divorced.

Who is Mike Holmes?

Mike Holmes is the Canadian recipient of Her Majesty, Queen Elizabeth II’s Diamond Jubilee Medal on June 18, 2012. Mike is also an investor, television host, and philanthropist.

Furthermore, Mike is also a judge on HGTV’s show ‘Handyman Superstar Challenge’ and its American counterpart ‘All American Handyman’ with Scott McGillivray.

He was born to Jim Holmes and Shirley Holmes of Caucasian ethnicity. He has an older sister and a younger brother– and is, therefore, a middle child.

He learned construction from his father, who taught him when he was 6 years old.

After spending time on construction work during his childhood, he started his first contracting company at the age of 19 with a crew of 13 employees.

Mike Holmes attended East York Collegiate Institute. He excelled in shop and auto mechanics, citing such classes as part of what enticed him into skilled trades.

Furthermore, it also assists those who have been impoverished by bad renovations. After Super Bowl LV, the Holmes Family Effect premiered in Canada on February 7, 2021. The series premiered on FOX a month later, on March 16, in the United States.

In 2006, Mike was honored in Canada’s House of Commons for his promotion of skilled trades and for his advocacy for improved building standards.

Mike Holmes has written two successful books: the national bestseller Home Renovation with Canada’s Most Trusted Contractor and Holmes Inspection: Everything You Need to Know Before You Buy or Sell Your Home.

In addition, he has also written a weekly newspaper column.

Mike Holmes is the national spokesperson for Skills/Compétences Canada and for WorldSkills Calgary 2009.

Mike is also active in the television world. The broadcast on HGTV Canada, ‘Holmes on Homes’ first started in 2001.

Also, he has been a guest for Ellen twice.

Mike has an estimated net worth of around $30 million as of 2022. However, his salary is unknown.

Mike’s comment regarding the Canadian contractors in one of the issues of Readers Digest attracted a fair amount of controversy.

Additionally, the residents of Winnipeg were not happy with one of the projects that Mike was part of in 2013.

What really happened to Mike Holmes?