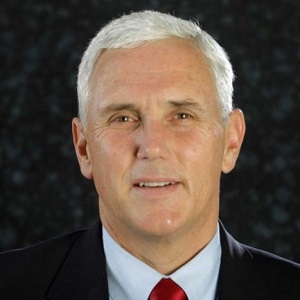 Despite the hysteria from the political class and the media, smoking doesn't kill

I'm a Christian, a conservative, and a Republican, in that order

I think it's time for the media and our leaders to get real and start telling the truth about the impact of adultery on our national life.

Mike Pence is a married man for a long time. He is married to Karen Pence. The couple met each other while Mike was attending the Indiana University Maurer School of Law.

The couple got married on 8 June 1985. They together have three children named Audrey Pence, Michael Pence, and Charlotte Pence.

The couple has been married for over three decades now and their relationship is going very well. There are no other records of his past and present relationships.

Who is Mike Pence?

Mike Pence is an American politician and lawyer. He is a Republican. He is the 48th and current Vice President of the United States.

From 2013 to 2017, he served as the 50th Governor of Indiana. In addition to politics, Mike is a former conservative radio and television talk show host.

He worked as a radio and TV host from 1994 to 1999. From 2009 to 2011, he served as the chairman of the House Republican Conference. He spent 10 years in the House of Representatives. Pence became the Vice President of the United States alongside Donald Trump in 2017.

Talking about Mike early life, Mike Pence was born on 7 June 1959, in Columbus, Indiana, USA. His birth name is Michael Richard Pence. Talking about Mike’s family, he is the son of Nancy Jane and Edward J. Pence, Jr. (1929–1988).

His father was in the U.S. Army during the Korean War and received the Bronze Star in 1953. Mike is an American by nationality and belongs to mixed (Irish, German, Colonial American, and English) ethnicity.

During his childhood, Mike was a Roman Catholic and a Democrat. In 1976, he volunteered for the Bartholomew County Democratic Party. He also voted for Jimmy Carter in the 1980 presidential election.

He became inspired by voted for Jimmy Carter in the 1980 presidential election. Mike was inspired by John F. Kennedy and Martin Luther King Jr to become a politician.

After graduating from Indiana University’s Robert H. McKinney School of Law in 1986, Mike began his career as an attorney in private practice. In 1988 and 1990, he ran for a congressional seat but was unsuccessful. After that, he became the president of the Indiana Policy Review Foundation in 1991.

After two years, he left the Indiana Policy Review Foundation in 1993. The following year, he began hosting The Mike Pence Show, a talk radio program based in WRCR-FM in Rushville, Indiana. He also hosted a weekend political talk show from Indianapolis from 1995 to 1999.

In 2000, he ran for the U.S. House of Representatives and won the seat in Indiana’s 2nd congressional district.  He was re-elected in the 2006, 2008, and 2010 House elections defeating Democrat Barry Welsh. From 2005 to 2007, he served as the chairman of the Republican Study Committee.

In the Republican Party vice presidential candidate selection, 2016, Donald Trump considered Mike as his vice-presidential running mate. He was elected Vice President of the United States as Trump’s running mate on November 8, 2016. After that, he became the chairman of President-elect Trump’s transition team.

Mike then visited South Korea to meet with acting President Hwang Kyo-Ahn on April 16, 2017. He has taken strong actions against gambling, crime, and illegal drugs.

Talking about Mike’s rumors, In April 2016, Mike signed into law a bill that forbids abortion on the basis of fetal chromosomal abnormalities, which is one of the most restrictive abortion laws in the United States. Many citizens and politicians criticized Pence for his action.

In 2013, became a part of a big controversy when he deleted comments of others posted on his official government Facebook page, for which many people criticized him. He later apologized for his actions.

Mike was also criticized for his statements against gay rights and same-sex marriage. He was criticized by many people when he said that gay and lesbians being able to marry one another would lead to disastrous outcomes in society.

Mike Pence is 5 Feet 10 Inches tall. He weighs 72 kg. He has light hair and hazel brown eyes. His other body measurements are unknown.

You may also read the age, parents, career, net worth, and social media of Jensen Ackles, Jennifer Lynch, and Caleb Deschanel.