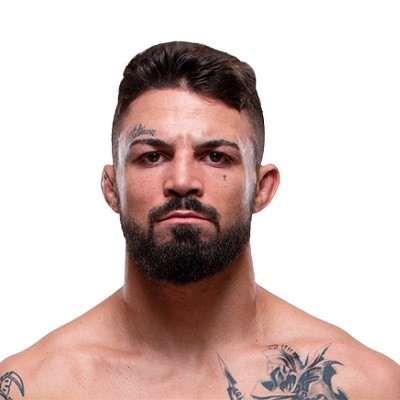 Mike Perry is neither a married man nor a single. The UFC martial artist is dating a girl. His girlfriend’s name is  Latory Gonzalez. He confirmed his relationship with the recent Instagram post where he is kissing Gonzalez.

In the earlier days, he introduced Latory as his friend. However, the friendship now has blossomed into love. Currently, they are enjoying their life as a couple.

Prior to that, Mike was married to Danielle Nickerson. They broke up in March 2018. As of now, Danielle and Mike share a good bond as friends.

Who is Mike Perry?

Mike Perry is a professional mixed martial artist of the Ultimate Fighting Championship and businessman. He is renowned for fighting at the welterweight division.

Currently, he holds a Purple belt in Brazilian Jiu-Jitsu.

Mike Perry was born on the 15th of September 1991 in Flint, Michigan. His birth name is Michael Joseph Perry. He is of Welsh ethnicity.

Till the date, he has not shared any details about his mother and father.

Talking about the educational background, she changed various schools in Michigan and Florida. Due to the frequent changes in the schools, he developed a violate nature that led him to house arrest and jail and path of drugs too.

At the age of 11, Mike Perry started training for the martial arts. Later, in September 2011, he chose to be a professional martial artist with 11 amateur fights with a record of 8-3.

On the 20th of August 2016, he made his UFC debut in UFC 202 fighting against Lim Hyun-Gyu. He defeated Lim via TKO in the first round.

Moving forwards, on the 17th of December 2016, he faced Alan Jounban at UFC on Fox 22. He lost the match to Alan via unanimous decision.

On the 22nd of April 2017, he fought against Jake Ellenberger at UFC Fight Night 108. He became the winner of the match via KO. Also, at the event, he was awarded $50k as the night performance bonus.

On the 16th of December 2017, he faced Santiago Ponzinibbio at UFC on Fox: Lawler vs. dos Anjos that he lost via unanimous decision.

Later, on the 10th of November, he faced Donald Cerrone at the UFC Fight Night 139. Donald defeated him via submission. The match is considered a low point in his career.

On the 27th of April 2019, he faced Alex Oliveria. He won the match with a unanimous decision with Fight of the Night bonus award.

On the 23rd of February 2020, he faced Al Iaquinta at the Submission Underground 11 event. He became victorious with the fastest escape time.

Besides being a martial artist, he also owns retails motor shop with the name, Mike Perry Motors.

Through his career as a mixed martial artist, he has made a net worth of $4 million. His average earnings as a martial artist are in the range of $60k.

Back in 2016, his name was highlighted at UFC 202, when his cornerman, former UFC middleweight Alex Nicholson made a racial comment to his Korean opponent Hyun Gyu Lim regarding Lim’s eyes.

However, the controversy was ended when Alex twitted stating that he has the utmost respect for every man who steps in the ring.

Mike Perry has black eyes and dark brown hair. His height is 5 feet 10 inches and weighs around 78 kg.

Talking about the appearance, he has an intense look with a square-shaped facial structure. Besides that, he prefers to have grown facial hair.