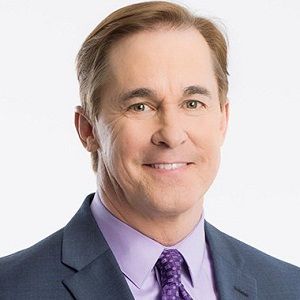 Mike Seidel is currently married to Christine Schroder. They have been married since 1994. They are blessed with two children named Sam and Joe Seidel.

Astoundingly, the couple held each other for 21 years and still going strong. They are an inspiration to lots of love birds all around the world. Also, there is no any affairs, rumors and controversy regarding his private life. Apparently, he has an excellent relationship with her family at the moment.

Who is Mike Seidel?

Mike Seidel is a meteorologist who hails from America. He is best-known and recognized for at The Weather Channel since March of the year 1992. Moreover, he is notable for covering the field report on severe weather, hurricanes, and snowstorms.

Mike Seidel was born on January 18, 1957, in  Salisbury, Maryland, U.S. He is of American Nationality but, his ethnicity is unknown. Similarly, he has not revealed anything about his parents’ identity till now.

Regardless, he was always keen on understanding the weather. He installed a weather station on the roof of his house when he was studying 8th grade.

Talking about his education and qualification, he completed his earlier education from Wicomico Senior High School. Later on, he enrolled in the Salisbury State College and graduated with Bachelor degree in Science and Mathematics. Furthermore, he earned a major in Geography. Also, he enrolled at the Pennsylvania State University with a Masters degree in Meteorology

He started his career working for four local radio stations: WJDY-AM, WDMV-AM, WSUX-FM, Delaware, and WKHI-FM while he was in high school. During his masters, he appeared on the show named Weather World airing on the Pennsylvania Public TV network.

Later on, he worked full-time broadcasting position at WYFF-TV starting from 1983 to 1989. Next, he returned to work as the meteorologist for WBOC-TV. He then joined The Weather Channel as a meteorologist in 1992.

After that, he covered the information related to the first storm of his career named Hurricane Edouard. Moreover, he has been the host of the National Football League “Kickoff Forecast” segments that air on every Sunday morning from NFL venues.

His reporting includes PGA Tour, the Baseball All-Star Game, the Indianapolis 500 and the World Series Mike. At the same time, he was at The Weather Channel appearing on many network news programs such as NBC-TV’s show named Today Show and NBC Nightly News.

Moreover, he became the first Weather Channel and U.S. meteorologist to report live from Cuba. Due to his contribution to geography, he has been awarded the American Meteorological Society’s Television Seal of Approval in the year of 1998 and Distinguished Alumnus Award from the department of topography in the year of 1994.

As a result of his successful career as a talented journalist, he amassed a lot of fortune and fame. As of now, his net worth and salary are unknown.

Mike Seidel has a well-maintained body structure. He stands at the tall height of 5 feet and 9 inches (1.76m) and weighs 79 kg. Furthermore, he has a light brown hair color and blue eyes. There is no information about his shoe size and dress size.