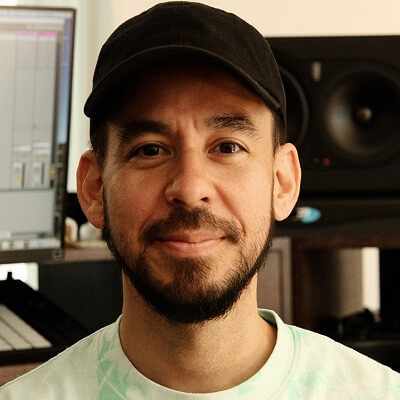 Most of us met a long time ago. Brad and I met in junior high and we met Rob in high school, we met Joe in college

Fort' is something that's heavy and militant. 'Minor' is taken one of two ways: either meaning small or meaning ... between the two basic chords in music theory, you've got major or minor, and minor is described as the darker, sadder chord. The album is about the dynamic when you put all those things together. You've got that spectrum

My bandmates in LP were very excited for me to be able to show the fans what I do individually. I wouldn't have done this without their complete support. In fact, I picked our guitarist Brad Delson as my A&

I do my best to try and just do interviews via email because I've had so many experiences where people have kind of minced my words. I just want an accountability on the other person's end for taking down what I'm saying accurately. I'm careful with my words and to kind of assume that I meant something similar to what I said isn't really fair.

Mike Shinoda is a happily married man. He is married to Anna Hillinger. She is an author.

The couple exchanged wedding vows on the 10th of May in 2003 and it is still going strong 17 years later. The couple has 3 children as of 2020, and their eldest son goes by the name of Otis Akio Shinoda. Any past relationships that Mike might have had before his current wife Anna are also not known.

Who is Mike Shinoda?

Mike Shinoda is an American musician, rapper, singer-songwriter, and record producer. He is famous as the founder and band member of the popular rock band, ‘Linkin Park’. He played a vital part in the band’s success as he was the rhythm guitarist, secondary vocalist as well as the band’s primary songwriter and producer.

Mike Shinoda was born on the 11th of February, 1977 in Agoura Hills, California, the U.S. As of 2020, his age is 43. His father, Muto Shinoda, a Japanese-American married European Donna Shinoda and the couple had two children. He also has a younger brother named Jason Shinoda. He spent his childhood days in Agoura Hills in LA.

His mother wanted him to learn classical music and so he took piano lessons since the age of six. This not only helped to develop his talents but also made him more curious regarding all types of music and this would later shape his career as a musician.

His ethnicity is Japanese-American.

Talking about his educational background, Mike attended Agoura High School with future bandmates from Linkin Park, Brad Delson, and Rob Bourdon. After graduating from high school he went on to the Art Center College of Design to study graphic design and illustration.

After graduating Mike worked in graphic designing while simultaneously working on his band. He along with Rob Bourdon and Brad Delson formed the band, Xero, in 1996 which would eventually become Linkin Park. They eventually added Joe Hahn, bassist Dave Farell, and vocalist Mike Wakefield. But since they were unable to find a record deal, Mike and Dave left leading to the band’s recruitment of lead vocalist Chester Bennington. They eventually landed a record deal with Warner Bros Records and released their first album, ‘Hybrid Theory’ in 2000 which performed exceptionally well helping the band attain international success.

Mike initially worked with technical aspects such as production, where he contributed heavily. His brilliant work in this department can be seen with the band’s second album ‘Meteora’. He didn’t resign his role to just producing the records and became involved more directly in the mixing and music in their projects. As such, Linkin Park’s mashup with Jay-Z, Collision Course went on to win a Grammy for Best rap/song collaboration in 2004.

Shinoda also simultaneously worked on his talents in art and graphics, showcasing his first public art show in 2004. He also worked on a side project, Fort Minor, and released an album under it. The album’s hit single Where’d You Go reached till no 4 on the Hot 100 chart. After his side project’s success, Shinoda also started contributing with vocals in songs from their 2007 album, Minutes to Midnight. He has contributed quite a lot in the music and occasional vocals with the later projects, A Thousand Suns, Living Things, and Recharged. Although the band has remained inactive following the suicide of their lead vocalist, Chester Bennington, Mike is still active in the music industry.

He has won two Grammys as well along with the band, for their singles, Crawling and Numb. Aside from that he also won the EWP Visionary Award in 2010. Overall he has had a hugely successful career in music along with his band Linkin Park and has made a name for himself individually thanks to his art showcases and side projects.

Shinoda stands at a height of 5 feet 11 inches and weighs around 77 kg. His hair color is black and he has dark brown eyes.

As of 2020, Mike Shinoda has an estimated net worth of around $45 million. He recently bought a newly built mansion in California for $7.95 million and he owns two other similar properties in Southern California. His annual income, however, is not as clear and is difficult to estimate as his income sources vary from his music to art and even from music videos uploaded to Youtube.

Despite being the founding member of the one of the most popular and influential rock bands of his generation, he has had a long career without sparking any major rumors or controversies up until this point. He is loved by his fans and his hardworking nature and talent have been recognized by many.

You may also like to read the Bio, Career, Net Worth, Body Measurements, and more about Rob Bourdon, Eminem, Ice Cube, etc.

Linkin Park Frontman, Chester Bennington is not any more!! As he allegedly hanged himself on the birthday of his deceased friend Chris Cornell, struggled with drugs and alcoholism and finally gave up.