Updated On November 25, 2022 | Published By: Robert Taylor
Share this
Single 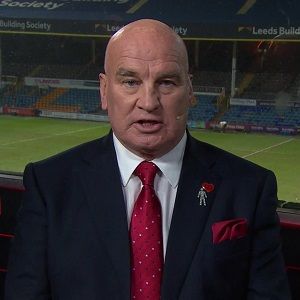 What is the relationship of Mike Stephenson?

Currently, there is not any information regarding Mike Stephenson’s marital life. To date, Mike has not seen any woman and he has not spoken about his personal life either.

So far, there are no rumors of his married life, girlfriend, and child. It seems he has been focusing more on his work rather than on relationship stuff.

As per the report, Mike is possibly single.

Who is Mike Stephenson?

Mike Stephenson is a former British rugby league footballer. He is famous as Stevo. Currently, he works at Sky Sports as a commentator.

Furthermore, Mike has won the 1972 Rugby League World Cup with Britain. In addition, he has also won the MBE (Member of the Most Excellent Order of the British Empire award.)

What are the birth facts of Mike Stephenson?

Mike was born on January 27, 1947, in Dewsbury, United Kingdom. He holds Caucasian ethnicity.

Talking about his childhood, he was forward in rugby as he began to play from an early age.

Concerning his education, father, mother, and siblings, there is not any information regarding them.

Mike Stephenson began his professional career with the local club Dewsbury in 1966. He earned his first international cap for Great Britain in 1971 against  New Zealand. In addition, Mike was in the squad when Great Britain lifted the 1972 World Cup. In 1972, he has also played for his country against France.

Moreover, Mike assisted his team by scoring 2-tries in a win over Leeds in the Championship Final. After winning the championship in 1973, Mike moved to the Australian Rugby League side Penrith. At the time in Penrith, Stevo played a total of 69 matches and scored 21 tries.

Mike started his broadcasting career at radio and television stations in Sydney, Australia. In 1988, he made his first appearance on the rugby league Ashes as a commentator for BBC Radio 2.

Besides this, Mike began to broadcast Rugby League coverage for BSB. Mike and Eddie Hemmings continued to broadcast after BSB and Sky Television merged to become BSkyB. Stevo retired from commentator after the 2016 Super League Grand Final.

Mike has managed to earn a couple of awards and honors. As a young player, he has won RFL Championship with Dewsbury. In addition, Mike was in the squad when Great Britain lifted the 1972 World Cup and he was also awarded the Harry Sunderland Trophy.

As of 2022, this former player’s net worth is estimated at around $1 million. Moreover, his salary as a commentator is around $18k-$75k per year.

Is Mike Stephenson involved in any rumors and controversies?

As of now, there are no desperate rumors regarding his personal and professional life. He has not been the topic of controversy to date. Furthermore, Mike has more focus on his work rather than on other stuff.

Mike Stephenson is a tall and heavy man. However, there is not any information regarding his height and weight. He has black eyes and he is bald.

Mike is not hugely active on social media. He holds a Twitter account in which he has around 4.3k followers.