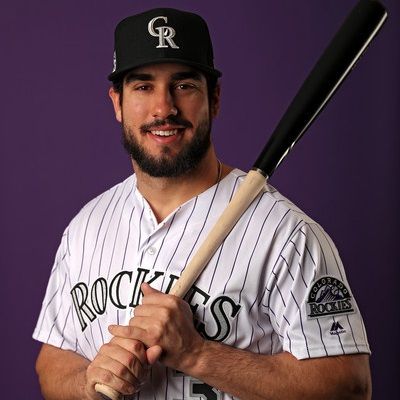 Mike Tauchman is a married person. He married his longtime girlfriend Eileen Ristau on January 7, 2017. The pair began dating since 2012 and had met while attending the same university. As of 2019 the couple is living with their rescue dog Kota and is yet to welcome children. They are living happily without rumors of extra-marital affairs and divorce.

Who is Mike Tauchman?

Mike Tauchman is a baseball player from America and he is a baseball outfielder for the New York Yankees of Major League Baseball. Previously, he played for Colorado Rockies.

He joined the William Fremd High School and then enrolled at Bradley University where he played college baseball for the Bradley Braves. There Mike Tauchman majored in Business Management and Administration.

He played both baseball and football for the Vikings as the quarterback and safety during his high school. Mike Tauchman finished his junior season with a .365 average, six doubles, 12 stolen bases and 38 runs scored. And in his senior year, he hit.490 with seven home runs, 10 doubles, 39 runs batted in and 16 stolen bases.

While at the Bradley University, he reached base safely more than any player in Bradley Baseball history, ended his career fourth with 59 career stolen bases and 10 career triples and became the second player in program history to win the Joe Carter MVC Player-of-the-Year Award (after Mike Dunne, 1984).

Moreover, in the 2013 MLB draft, Tauchman was selected by the Colorado Rockies in the 10th round. His debut game in the  Major League Baseball (MLB) was on June 27, 2017. After years of playing for the Colorado Rockies, he was traded to New York Yankees on March 23, 2019.

He won the Missouri Valley Conference Baseball Player of the Year Award in 2013, his senior year.

His annual salary has been revealed to be around $557,000 while his net worth is yet to be estimated and will soon be updated.

He has a height of 6 ft. 2 inches and weighs 98 kg. Mike has dark brown eyes and black hair.