Mike Tyson has served jail time and has appeared in several films. 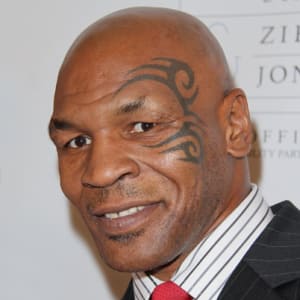 When I was in prison, I was wrapped up in all those deep books - that [Leo Tolstoy] crap. People shouldn't read that stuff. When we read those books, what purpose does it serve in this day and time?

As a young kid, I used to watch boxing films and I would stop the film when I'd see something I liked - the way he bowed, the way he'd hit somebody, or the way he stood with his belt - and I would rewind it and emulate it. Over and over again. I liked the villains best because you never forgot them.

What is the relationship of Mike Tyson?

At present Mike Tyson is married to his longtime girlfriend, Lakiha Spicer “Kiki” on June 6, 2009, at the La Bella Wedding Chapel. The couple has two children, a daughter Milan and a son Morocco.

Mike Tyson dated TV personality Kenya Moore in the past. Then, he dated the English model, actress, and singer, Naomi Campbell in 1987.

At that time, Mike admired her body and unscary attitude.

But, this marriage only remained live for a year and they broke off on February 14, 1989. She was not at all happy with Tyson as he was abusive and tortured her. They used to live in a mansion in Bernardsville, New Jersey.

Likewise, he dated singer, actress, and entertainer, Suzette Charles in 1989. Then, he dated Tabitha Stevens but they got separated. He dated model and former Playboy Cyber Girl, Coco Johnsen in 1996.

Similarly, he married Monica Turner who has worked as a pediatric resident at Georgetown University Medical Center.

They were married for about 5 years and called it quits in January 2002. She subsequently filed for divorce which was finalized on January 14, 2003. Through this marriage, Mike has two children, son Amir (b. 1997) and daughter Rayna (b. 1996).

He dated Dominican actress, Luz Whitney and Mike was involved in a 4-year long relationship from 2000 to 2004.

He had a fling with actress and attorney, Lauren Woodland. She is 11 years his junior.

He dated Egyptian-Sudanese-American novelist Kola Boof and had an encounter with Mike in 2006. He helped Kola’s son to enter a private school and this started a small relationship between them.

She was 12 years younger than him.

Who is Mike Tyson?

She has served jail time and has appeared in several films.

He was born in Brownsville, Brooklyn, New York, the United States on June 30, 1966. His birth name is Michael Gerard Tyson.

Whereas, Tyson’s biological father is listed as “Purcell Tyson” (who was from Jamaica) on his birth certificate, the man Tyson had known as his father was Jimmy Kirkpatrick.

He had an elder brother Rodney and a sister Denise who passed away in 1991 due to a heart attack.

Tyson completed his schooling at Tryon School for Boys in Johnstown, New York. It was there that Bobby Stewart, a juvenile detention center counselor and former boxer, noticed Tyson’s boxing skills.

Tyson trained for the sport. He was under the full-time custody of Amato who set a rigorous training schedule for the aspiring boxer.

Tyson attended Catskill High School during the day and practiced in the ring in the evening. However, he did not graduate from school and left his studies as a junior.

Mike Tyson’s training was very well evident in his performance at the Junior Olympic Games in 1981 and 1982, where he won gold medals convincingly, beating opponents Joe Cortez and Kelton Brown, respectively.

He fought against the eventual 1984 Summer Olympics heavyweight gold medallist Henry Tillman twice in the trials, losing on both occasions.

Tyson’s back-to-back victories brought him under media attention, who billed him as the future heavyweight champion.

While his career was progressing upwards, Tyson faced turmoil off the ring as his friend, philosopher, and guide Amato left for the heavenly abode. Rooney filled up for the shoes of Amato.

Mike Tyson’s first televised fight was against Jesse Ferguson. Likewise, he stumped the opponent by breaking the latter’s nose in the fifth round. By the sixth round, Tyson was declared a winner. By the age of 20, Tyson had won a record 22 back-to-back matches, 21 of those victories coming from a knockout.

His string of victories finally brought him his first title fight against Trevor Berbick for the World Boxing Council (WBC) heavyweight championship.

On November 22, 1986 Tyson defeated Berbick in the second round knockout and at the age of 20 years and 4 months became the youngest heavyweight champion in history.

His ambitious campaign to fight all the heavyweight champions in the world moved a step further as he knocked out Pinklon Thomas in the sixth round and Tony Tucker in the twelfth round to win the latter’s International Boxing Federation title.
With this, Tyson became the first fighter to hold the WBC, WBA, and IBF titles in a single year, 1987.

He holds the record of being the Youngest Heavyweight Boxing Champion to date.

He was only 20 years and 4 months old then. The Junior Olympic quickest KO (Knock-Out) at 8 seconds is held by Tyson. In 1985, Tyson won the Ring magazine Prospect of the Year.

For his outstanding performance in the ring, he was awarded the Ring Magazine Fighter of the Year award in 1986 & 1988. Tyson was voted the BBC Sports Personality of the Year Overseas Personality in the year 1989.

Tyson has included in the WWE Hall of Fame in 2012 for his achievements in the professional boxing arena.

As sources have calculated, Mike currently has a net worth of around $3 million.

He once had over $300 million of net worth but he has lost it all.

There was a rumor that Mike was dating TV personality Kenya Moore in the past.

Mike Tyson has a height of 5 feet 10 inches. Additionally, he weighs 109Kg.

Being an American boxer Mike has a huge fan following rate. He has been active on social sites and YouTube.