Mike Vitar is a married man. He tied the knot with a Professional Photographer, Kim Vitar. The lovers tied the marital knot in 2006.

They have 3 children namely Eli, Wesley, and daughter Norah Paige. Currently, she resides in Southern California city with his wife and children. Furthermore, there is no such news of their separation and divorce. 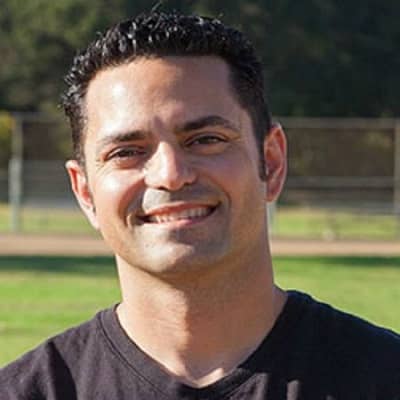 Who is Mike Vitar?

Mike Vitar is an American former actor who is best known as Benjamin Franklin “Benny the Jet” Rodriguez on ‘The Sandlot’.

Furthermore, he has won a Young Artist Award for the Outstanding Youth Ensemble in a Motion Picture for the same film in 1994. Currently, he is working as a firefighter.

Mike Vitar was born on December 21, 1978, in Los Angeles, California, USA. As of 2021, he will be celebrating his 43rd birthday. His birth name is Michael Anthony Vitar.

Likewise, his parent’s name is not mentioned. Mike had an older brother, Pablo who was in the Los Angeles Police Department. Unfortunately, he died due to colon cancer on January 29, 2008. He also has an older sister, Elizabeth. He started acting at the age of 12.

Vitar is of Latin Descent and American Nationality. Moreover, his birth sign is Sagittarius. Talking about his education, he attended St. Francis High School for his education.

Having started his career with a minor role in the 1991 movie, Diplomatic Immunity later he debuted from the Tv Series ‘Brooklyn Bridge’ in 1991 followed by another movie ‘Sunset Grill’ in 1993.

Mike started acting at the age of 12 when a casting manager spotted him in line for a ride at a school carnival and decided to take him to movies. After that, there is no looking backward and has appeared in more than 8 films to date. Some of the most notable films he has played include The Sandlot with Tom Guiry, American Sports Comedy Drama film D2: The Mighty Ducks in 1994, and this was followed by movies like NYPD Blue, D3: The Mighty Ducks, and Chicago Hope among others.

In 1997, he retired from acting and decided to pursue his career as a firefighter to save the lives of people. He has been a firefighter for the Los Angeles Fire Department since 2002.

There are no details of his salary but he has an estimated net worth of around $300K.

He has won a Young Artist Award for the Outstanding Youth Ensemble in a Motion Picture for the film, The Sandlot in 1994.

Mike stands 6 feet and 0 inches tall and his weight is unknown. He has black hair and dark brown eyes.