Who is Mike Weir Dating?

As per the sources, Mike Weir is dating his long-term girlfriend, Michelle Money. Michelle is an actress who is best known for appearing in ‘The Bachelor.’

However, Michelle has a daughter with her ex-husband, Ryan Money.

Similarly, Mike Weir was previously married to Bricia Weir. They have two children named Elli Weir and Lill Weir together. Later, the couple separated in 2015  after 21 years of marriage but no reasons behind their separation are disclosed yet. 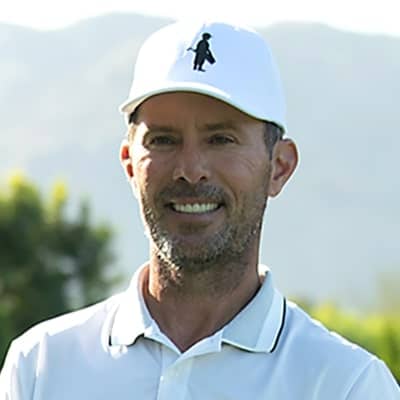 Who is Mike Weir?

Mike Weir is a famous Canada-based professional golfer who plays on the PGA Tour. From 2001 to 2005 he was inducted into the top 10 of the Official World Golf Ranking.

He is the only Canadian man to win the major championship and is the winner of the Master’s Tournament in 2003.

Mike Weir is was born in Sarnia, Ontario, Canada on May 12, 1970. Weir is 52 years old as of 2022 and he maintains a Canadian nationality. He is of Caucasian ethnicity while Taurus is his birth zodiac sign according to the astrologers.

He graduated from Brigham Young University with a major in Recreation Management winning the Ontario Amateur Championship in 1990 and 1992. Weir has not revealed his parents, siblings, and educational life.

Miker Weir first learn to play golf at Huron Oaks Golf Course during that time Steve Bennett was his coach. When he was 12, a junior tournament was won by him. Though hockey was his first prioritized game, he gave playing it.

He started his professional career in 1992 through Canadian Professional Golf Tour and won three events. In 1998 he joined the PGA Tour.

At the 1999 Canada Championship based in Surrey, British Columbia, he became the first Canadian to win a PFA Tour even in Canada after 45 years. In 2001 he won The Tour Championship. In 2003 he became the winner of both Bob Hope Chrysler Classic and Riviera Country Club.

In the same year in April 2003, Masters Tournament was won by him which was held in Augusta, Georgia. He was the only second left-handed player to win any of the four majors in the tournament. He ranked third in the Official World Golf Ranking. He was awarded the Lou Marsh Trophy for outstanding Canadian athlete for his remarkable play in 2003.

He won at the Nissan Open and in 2007, he won the Fry’s Electronics Open which got him tied with George Knudson. In 210 he had his ligament torn on his right elbow and he spent his 2011 also working for the recovery. In 2012, he returned and played ATandT Pebble Beach National Pro-Am and joined European Tour. He finished the ATandT Pebble Beach National  Pro-Am at +6. Similarly, he played the Byron Nelson Championship and was behind Brendon Todd with two strokes. The 2016 PFA Championship for the TNT Broadcast team was joined by him.

A whole season of Web.com.Tour was played by him and joined the PGA tours while he was 50 years old.

The net worth of Mike Weir is estimated to be about 25 Million USD as of 2022.

Also, Weir is a BEMER ambassador.

However, Weir has not disclosed her salary and income.

Mike Weir has not been involved in any rumors and controversies as he is able to maintain a clean profile.

Mike Weir has an athletic body standing at the height of 5 feet 9 inches and weighs around 70 Kg.

Talking about his physical appearance, with a fair complexion he has a couple of black eyes and grey-colored hair.

Mike Weir is available on Instagram under the username, @mweirsy with more than 39.4 K followers. He also has a Twitter account which is enriched with around 20.6 K followers.