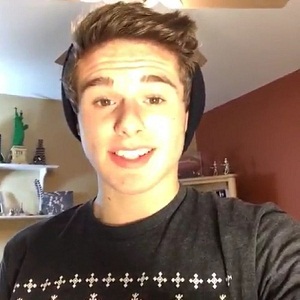 The heart is the most powerful broadcaster. Of all the energy senses of the body, the heart center produces the strongest signal

Mikey was in a relationship with another famous YouTuber, Griffin Arnlund.

They were together since September 2015. However, they mutually ended their relationship during the last quarter of 2016. Since then, he is speculated to not being in any relationships, enjoying his single life.

Who is Mikey Murphy?

Mikey Murphy is a YouTube star and proclaimed “average internet vlogger” known for his channel MikeIsAverage. He is also a multi-hyphenate actor, writer, director, and producer. His career began on YouTube, with his channel having over 1.5 million subscribers.

Mikey Murphy was born Michael J. Murphy on May 12, 1998, in New Jersey, US, to Michael(father) and Monica Murphy(mother). His mother is a nurse and his father is an Occupational Therapist at a special school for kids. He has a younger sister named Sydney. He spent several years learning Karate.

Mikey created his first YouTube channel called ‘The Original Fiction TV’, along with his school friend Liam, to publish a project assignment. Murphy liked what he was doing as he was fond of photography and filming since the time he was a toddler. Later, he teamed up with another YouTube star, Luke Korns, and produced a lot of collaborated videos which fetched him good attention for his now-main YouTube channel, ‘MikeIsAverage’.

Back when he started the channel for his school project, he got a lot of criticism from his classmates which eventually made him drop out of school. He then met Luke Korn who also has a YouTube channel called, “UncleKornicob” at the “Playlist Live” event. After moving to LA, he is working on with Jonah Green and represented by ‘Big Frame’ and ‘Creative Artists Agency. On November 30, his channel reached a million subscribers. He thankfully posted the same as a vlog on his channel. As of January 2017, his channel has over 1.5 million subscribers and over 45 million video views.

Mikey has now moved on to LA, California, to be closer to the filming industry. His frequent visits to fame street, made channels like “AwesomenessTV” notice his talents. He can often be seen in their channel, hosting events and in a series called “Royal Caribbean”.

Murphy has over 58 thousand followers on Vine and 643 thousand followers on Instagram. As a tribute to their earlier days on YouTube, Luke and he launched a compilation of their favorite songs on iTunes in the album, “From the stories we tell”. He played Would You Rather in a video with Magcon Boys Hayes Grier, Aaron Carpenter, Carter Reynolds, and Matt Espinosa.

According to the sources, his salary is unknown and his net worth is estimated to be around $ 1 Million.

There have been no rumors and/or controversies surrounding Mikey to date. Thus, he has managed to keep his image clean.

He has a height of 5 feet 6 inches and weighs 65 kg. He has dark brown hair color and his eye color is hazel. There is no information about his dress size and shoe size.

Griffin Arnlund; a small town girl to the stardom!! All her journey including relationship