Miki has a record of eating 48.5 hot dogs in just 10 minutes. She is currently in a relationship.

Nick has received the 6th position as a competitive eater with Major League Eating. Miki and Nick got engaged, Miki announced the news through her Instagram post on 28th April 2021. They are living happily together in Torrington Connecticut.

Miki dated an American personal trainer, Juan Rodriguez. Juan and Miki separated their ways after some months. Once, her ex-boyfriend stole her credit card to book a plane flight, but due to his mistake, Miki received the sentence of 10 months home confinement for a false bomb threat to United States Airways in the Year 2010. 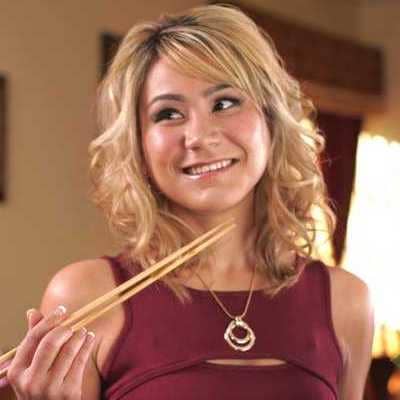 Who is Miki Sudo?

Miki Sudo is an American Competitive eater. Miki Sudo is widely famous as the three-time winner of the women’s division of the Nathan’s Hot Dog Eating Contest. Miki has a record of eating 48.5 hot dogs in just 10 minutes.

Miki Sudo was born in New York, New York City, the United States of America 0n 22nd July 1985. Her horoscope is Cancer and as of 2022, her age is 36 years. She was born to European American mother and Japanese father. Miki belongs to a mixed ethnical background and her nationality is American.

Talking about her childhood, when she was 5 years old she and her family moved to Japan. Miki and her family lived for seven years in Japan and then returned back to the United States.

For education, Miki attended the University of Nevada, Las Vegas in Paradise, Nevada. No information is revealed about Miki Sudo’s siblings.

Back in 2013, she started her career as an expert eater. She competed in the La Vegas Nathan’s Famous Hot Dog Eating Contest Qualifier in the same year. In Year 2o14, she began her major League Eating competition.

Miki Sudo- Net Worth and Salary

As of 2022, Miki Sudo has an estimated net worth of $500k. According to some sources, top competitive eaters can easily make $500k per year. She makes a reasonable sum of money from her YouTube channel and Instagram sponsorships and endorsements. However, her salary is unknown to the media.

Miki Sudo has a good height of 5 feet 4 inches with a bodyweight of 52kg. She has blonde hair color and her eye color is dark brown. There is not much information about her hip size, dress size, shoe size.

Who is Miki Sudo Married?

Miki Sudo is not married to date. However, she is in a romantic relationship with her boyfriend, Nick Wehry. Her boyfriend, Nick is an American competitive bodybuilder who received the 6th position as a competitive eater with Major League Eating. However, Miki has not shared any information on their first meet and relationship history. On 28th April 2021, Miki and Nick got engaged, Miki announced the news through her Instagram post.