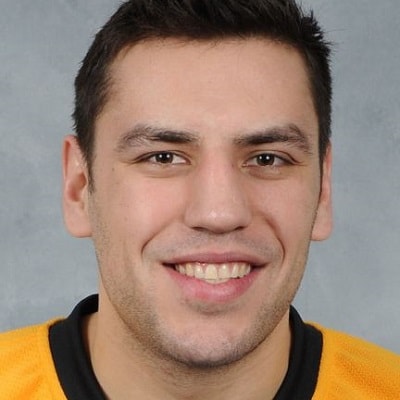 Milan Lucic is a married person. He has been married to his longtime girlfriend Brittany Carnegie since August 27, 2012. The couple has welcomed three children: older daughters Valentina Lucic, Nikolina Lucic, and son Milan Lucic Jr. (born May 17, 2018).

The couple is currently living their life happily together.

Who is Milan Lucic?

Milan Lucic is a Canadian professional ice hockey left winger and an alternate captain for the Edmonton Oilers of the NHL. Previously, he played for Boston Bruins and Los Angeles Kings.

He was born on June 7, 1988, in Vancouver, British Columbia, Canada. Milan is currently 31 years old. He was born to Serbian couple Dobrivoje “Dobro” Lučić and Snežana Kesa. His father is a longshoreman who emigrated from Yugoslavia and his mother arrived from Yugoslavia with her family at the age of 2. He has an older brother named Jovan and a younger brother named Nikola.

Milan holds Canadian citizenship but his ethnicity is unknown.

For his education, he joined Killarney Secondary in Vancouver and became a fan of the hometown Vancouver Canucks. Later, he joined South Delta Secondary School. He was diagnosed with Scheuermann’s disease at the age of 15.

In 2004, he started his career and played with Coquitlam Express, Vancouver Giants. He was selected by Boston Bruins in Entry Draft.

On October 5, 200, he debuted his NHL career with Boston Bruins and later chose as the Giants’ next team captain and played there until 2013 -2014 season.

Then, Milan Lucic was traded to the Los Angeles Kings on June 26, 2015, and played the season with 20 goals. By the following year, he became an unrestricted free agent and signed with Edmonton Oilers with a Severn year, $42 million contracts.

His most MVP performance at the 2007 Memorial Cup and he became the team captain of Canada in 2007 for the 2007 Super Series against Russia. He rose to fame even more for a hit against opposing goaltender Ryan Miller during a game against the Buffalo Sabres.

He has an estimated net worth of around $22.5 million and he has earned that sum of money from his professional career. Also, he earns around $4 million per year from his career.

There was a rumor swirling on Vancouver radio and was talking about a potential Milan Lucic for Loui Eriksson trade, and if Jesse Puljujarvi could be included in it.

Milan Lucic has a height of 6 ft. 3 inches and weighs 105 kg. Milan has dark brown eyes and brown hair.