Miles Austin is a married man. He is married to Stacy Sydlo. She works as a physician liaison officer at Mountainside Hospital in Montclair, New Jersey.

The couple had first met while in college in 2000. They were both into sports, Sydlo was on the Lacrosse team while Austin played football. They exchanged wedding vows on 1st March 2014. The groomsmen were his Cowboys teammates, Jason Witten, Tony Romo, and DeMarco Murray.

From their relationship, they have three children, Maven, Ava, and Miles IV.

He famous dated Kim Kardashian for a few months in 2010. 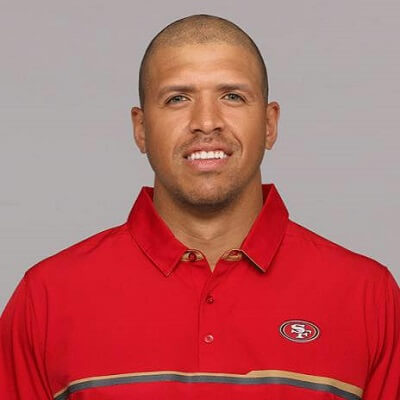 Who is Miles Austin?

Miles Austin is an American football coach and former player.

Currently, he serves as an offensive quality control coach for the San Francisco 49ers. He played 10 seasons in the NFL with the Dallas Cowboys, Cleveland Browns, and Philadelphia Eagles.

His father was a Nebraska native whereas his mother was born and raised in New Jersey. He is one of his parents’ two sisters and has one sister named Jennifer Austin.

Austin spent his childhood days in Garfield, New Jersey, US. His father is an African-American whereas his mother is Caucasian making his ethnicity Mixed (African-American, Caucasian).

Talking about his educational background, he went to Garfield High School where he was in the school’s football, basketball, and track, and field squad.

He recorded the third-longest javelin throw in Bergen County history and placed third in the triple jump event at the New Jersey Meet of Champions.

Following that, he played college football for Monmouth Hawks. At the end of his college career, he became the record-holder in receiving yards also set a college single-season record for touchdown catches with 12.

The Dallas Cowboys signed Austin as an undrafted free agent in 2006. In his first season, in a playoff game against the Seattle Seahawks, he returned 3 kickoffs for 136 yards in the game, including a 93-yard touchdown return.

From 2009-10, Miles successfully registered 150 receptions for 2,378 yards with an average of 15.7 and 18 touchdowns. His receiving yardage ranked fifth in the whole of the NFL over that timespan, while his touchdown total was also fifth.

After leaving Dallas, he had two underwhelming stints with the Cleveland Browns and Philadelphia Eagles before retiring. The Browns had signed him as a free agent on May 15, 2014.

After less than a year, on March 31, 2015, Austin and the Eagles agreed to terms on a one-year deal. On December 7, 2015, the Eagles released Austin and he retired.

Austin is also a philanthropist. He started the Austin Family Foundation with a mission to promote and support youth programming in lower-income areas with a focus on community involvement and character development. One of the major events for the foundation is its student-athlete conferences, which focus on making participants feel they can make a positive impact on their peers and in their communities in addition to building leadership skills both on and off the field.

Miles Austin is currently an offensive quality control coach with the San Francisco 49ers. He joined the club in 2019 after spending a previous couple of years (2017-18) with the Cowboys as a pro & college scouting intern.

Austin stands at a height of 6 feet3 inches and weighs around 98 kg. His hair color is black and his eyes are dark brown in color.

Miles Austin has an estimated net worth of around $4 million as of 2022. He earned a hefty sum of money as an NFL player.

On September 9, 2010, he agreed to a six-year contract extension with the Cowboys which was worth $57 million which included a $17 million salary. With the Eagles, his one-year deal was worth $2.3 million. There is no information about his current salary as a coach but on average, offensive quality control coaches earn around $100k – $150k per year.

Austin has not been involved in any controversies. He has been able to keep himself away from any type of controversy and scandal. So far, he has not done anything controversial in his career. Similarly, there are no rumors about him of any kind. He has kept his profile clean and has simply focused on her career and personal life.

You may also like to read the Bio, Career, Body Measurements, Net Worth, Social Media, Relationships, and more about Freddie Kitchens, Lincoln Riley, Dave Wannstedt, etc.

Sharna Burgess is Pregnant! Brian Austin Green, 48 to be a Father of 5th Child