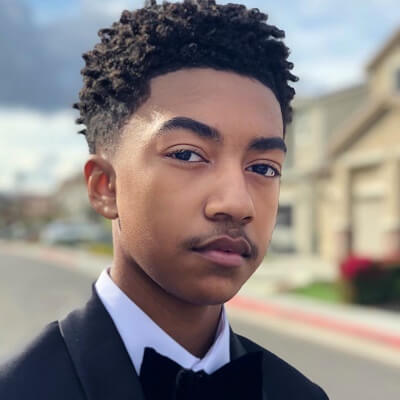 Miles Brown is currently single. He is more focused on his studies and his career as of now. He is still just 15 years old so he is still very young to be in a serious relationship.

Who is Miles Brown?

Miles Brown is an American actor and dancer. He is best known for his portrayal of Jack Johnson in the American sitcom, ‘Black-ish’s. For his portrayal of Miles, he has received numerous award nominations and also won a Young Artist Award for Best Performance in a TV Series – Supporting Young Actor.

Miles Brown was born on December 28, 2004, in Oxnard, California. As of 2020, his age is 15. He was born to parents Jack “Wildchild” Brown and Cyndee Brown. His father, Jack, better known by his stage name Wildchild, is an American rapper originating from  California. He is one of the members of the American hip-hop group, Lootpack. He has an elder sister named Kiana Brown.

Brown was interested in dancing from a young age and started dancing when he was just three. He spent his childhood days in Oxnard. His ethnicity is African-American.

Brown is currently a school student. However, he has not revealed which school he attends.

Miles Brown made his debut in a feature film as part of the Little Rascals Intro Battle Crew in the movie, ‘Battlefield America’.

In 2014, he landed his best-known work to date. He got the role of Jack Johnson in the ABC comedy series, ‘Black-ish’s. For his portrayal of Johnson, he has received nominations for two Screen Actors Guild Awards, four NAACP Image Awards, and the BET YoungStars Award. Moreover, he won a Young Artist Award for Best Performance in a TV Series – Supporting Young Actor. The show has aired six seasons so far.

In 2018, Brown landed the main role of Emmett in the indie film, ‘Boy Genius’. The same year, he released his first single titled, ‘NBA,’ and took part in the first season of Dancing with the Stars: Juniors.

Brown also loves dancing and has danced in the music videos of ‘Loving You Is Killing Me’ and ‘Yeah 3x’. Also, he has appeared on the Ellen Show, Conan, The Steve Harvey Show, etc. He took part in the 5th season of America’s Got Talent as a part of the dance duo, ‘Future Funk’, and made it to the semifinals.

In addition to acting and dancing, he is also a member of the Jr. NBA Leadership Council. It is a select group of NBA/WNBA players, coaches, legends, and celebrities tasked with providing leadership, thought, and insight. For his role as a Jr. NBA correspondent, he travels to marquee NBA and Jr. NBA events.

How much is Miles Brown worth?

Miles Brown has an estimated net worth of around $900k. He has garnered such a huge net worth already and is still just 15 years old. There is no information about his salary. On average, actors in America earn around $40k per year.

Brown stands at a height of around 4 feet 9 inches. He has dark brown eye color and his hair color is black. He has not revealed his weight and other body measurements.

Miles has not been involved in any controversies. He has been able to keep himself away from any type of controversy and scandal. So far, he has not done anything controversial in his career. Similarly, there are no rumors about him.

The teenage actor is active on social media sites. He has around 291k followers on Facebook and around 78.3k followers on Twitter. Similarly, on Instagram, he has more than 817k followers.

You may also like to read the Bio, Career, Net Worth, Body Measurements, and more about Jodie Fletcher, John Terlesky, Ade Edmondson, and more.