Miles Mikolas is an American baseball pitcher. He plays for the St. Louis Cardinals team. He is a married man and has three children. 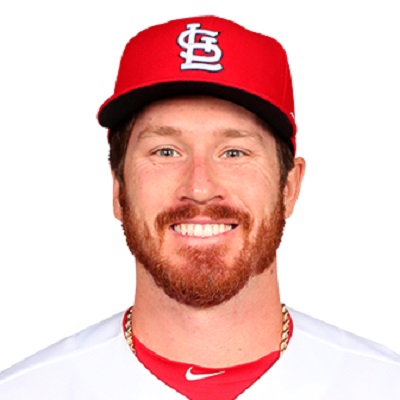 Miles Mikolas is a married person. He is married to Lauren Mikolas since May 2015 and went to Japan for their honeymoon. His wife was a primary school teacher and a UFC ring girl.

Furthermore, she is a certified wellness coach who with her lifestyle blog became a social media celebrity in Japan. Additionally, she runs a blog named Fearless Charm.

The couple welcomed their first child, a daughter named Lillianne in March 2017 and then welcomed twins named Madelyn, and Miles Jr. March 2017 in July 2018. Although he is busy in his career, still, he manages to spend his time with his family.

Who is Miles Mikolas?

Miles Mikolas is an American baseball pitcher for the St. Louis Cardinals of Major League Baseball (MLB). Previously, he has played for the San Diego Padres and Taxes rangers in MLB. Also, he became sixth in the NL Cy Young Award in 2018.

He is also famously called as Lizard King. This nickname is given to him after he swallowed a lizard in 2011 during an Arizona Fall League game.

He was born on August 23, 1988, In Jupiter, Florida, USA. he was born to father Stephen Mikolas but information about his mother and ancestry is not available.

Also, he has a sibling named Karel and an older half-sibling Martina.

He played for Jupiter Community High School in Palm Beach County, Florida, from which he graduated in 2006. After that, he joined Nova Southeastern University and played college baseball for the Nova Southeastern Sharks.

Miles Mikolas got selected in the seventh round of the 2009 MLB Draft by the San Diego Padres. In 2010, he pitched as a reliever for the Class-A Fort Wayne TinCaps.

After a year, he played for High-A Lake Elsinore Storm and later promoted to the Double-A San Antonio Missions on July 4, 2011.

After the 2013 season, he along with Jaff Decker were traded to the Pittsburgh Pirates by The Padres for Alex Dickerson. Also, he started the 2014 season with Round Rock Express.

On December 5, 2017, Mikolas signed a $15.5 million two-year contract with the St. Louis Cardinals. On April 2, 2018, at Miller Park against the Milwaukee Brewers, he won his debut with the Cardinals 8–4. While batting, for his first major league hit, he hit a two-run home run versus Zach Davies.

He became the All-Star in 2018 and NL wins leader in 2018. In addition, he was named a Midwest League All-Star.

He has an estimated net worth of over $10 million. According to some reports, the NBA player has an average salary of $17,000,000 annually which is slightly higher than Kolten Wong’s Salary.

Miles Mikolas has dark brown eyes and dark brown hair. He is 6 ft 5 inches in height

But other information about his weight, etc. are not available.

To know more about Tacko Fall, Gritt Cole, and Halle Berry, please click on the link.