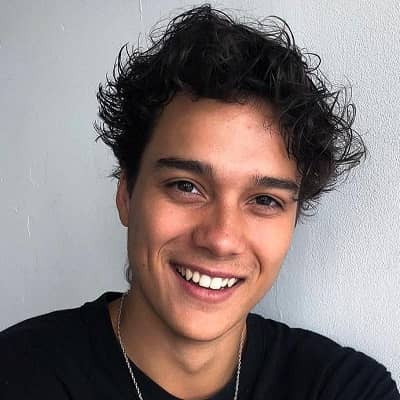 Miles Nazaire is single as of now and isn’t seen engaged in any relationship.

Previously, he was in a relationship with Maeva D’Ascanio. They dated for around three years. However, they broke up due to trust issues.

Who is Miles Nazaire?

Miles Nazaire is a popular TV personality and a Youtuber. He rose to fame after appearing the Season 15 of Channel E4’s Made in Chelsea.

Miles was born on Dec 12, 1995, in England. He grew up between Notting Hill in London and south of France. Miles is of English and Old French origin.

His father, Jacques Nazaire who is a musician and painter. He has also the founder of Artpeggios Music School in London.  Likely, his mother’s name is Victoria who is a professional sculptor.

He has a sister. Miles along with his sister used to make various portraits and houses of cardboard in his childhood.

He has his schooling at the Brit School of London. He graduated with a degree in Broadcast Digital Communications in 2014.

Miles initially worked as a profit-sharing independent TV production company KinckerbockerGlory TV. Followingly, Miles has been working as a marketing and videographer manager for The Eelbrookc since 2012.

Also, he worked for MN Productions as a filmmaker. Not only it, but he has also founded his own music label known as  NuffSed.

Following his passion for filmmaking and editing, he also launched his own YouTube channel in 2o18. He has documented several topics including nutrition, lifestyle, and fitness. However, he isn’t active on it now. Miles is sometimes is featured in Jack Maynard’s videos.

He gained popularity after he appeared on Channel E4’s Made in Chelsea Season 15 in the year 2018. Furthermore, just in 2020, he has his appearance in the TV Series, Ex on the Beach.

As of now, he is involved in modeling, gyming, and building his social media career. He will sooner start his own business and work on being an entrepreneur.

The star has amassed a net worth is around $1 million. He must have earned from his TV and social media career. However, they are not revealed yet.

Talking more, Francis Boulle is one of the richest Made in Chelsea contestant ever. His net worth alone is over £10million.

The star has able to gain much fame in the media without appearing in any kind of rumors and controversial news.

Miles is into fitness and has an athletic built body. Although his height and weight measurement are not available. Talking more, he has dark brown colored hair and eyes.

He has various tattoos on his body and has even documented his time under the needle on Youtube. One of his latest tattoos was an electric guitar in his lower arm.

He joined Twitter in March 2018 and has around 2.5K followers as of now. Likely he has over 175K followers on Instagram.

Likely, he is also active on TikTok with around 96 K followers and 338K likes.

You may also read the bio of Jenna Brown, Derick Dillard, Johnny Bananas, and Tori Deal.