Miley Stewart on the Disney Channel television series Hannah Montana in 2006. Along with her, her father had also starred on the series, which aired for four seasons until 2011.

Miley Cyrus is in a relationship with Cody Simpson. They started to see each other in early 2020.

She was married to her longtime boyfriend, Liam Hemsworth. They tied the knot on 23rd December 2018. The couple had engaged in 2016.

Their wedding ceremony was a private affair, which was not known to the media. It is said that the couple had gone on a vacation and that time they got married. After the wedding, Miley uploaded pictures of her wedding.

However, the couple separated a few months after their marriage. Their divorce was finalized in 2020. 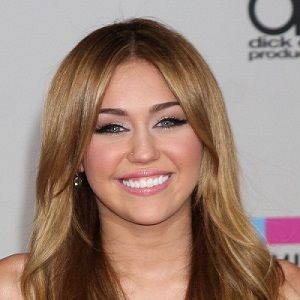 Pink isn't just a color, it's an attitude

There's no right or wrong, success or failure. I don't look at things as black or white. My life won't be a series of either/or -- musician or actor, rock or country, straitlaced or rebellious, this or that, yes or no. The real choices in life aren't that simple

I want to be Snooki, I love her. I'm obsessed. She's one of the only people I've asked for an autograph and a picture from because I love her and I'm inspired by her.

Who is Miley Cyrus?

Miley Cyrus is a singer, songwriter, as well as an actress. Miley Cyrus real name is Miley Ray Cyrus and she belongs to American society.

She had acted as the character Miley Stewart on the Disney Channel television series Hannah Montana in 2006. Along with her, her father had also starred on the series, which aired for four seasons until 2011.

She has been featured as a coach on the singing competition television series The Voice and has appeared in two seasons of the show in 2016.

Miley Cyrus was born on 23rd November 1992 in Franklin, Tennessee, United States. She is the daughter of mother  Tish Cyrus and father  Billy Ray Cyrus.

She was born with supraventricular tachycardia which led to her birth name as Simley and then turned to Miley.

Subsequently, she had five siblings all together. Then she had graduated from Heritage Elementary School.

Furthermore, she had taken classes on singing and acting at the Armstrong Acting Studio in Toronto.

Miley Cyrus had started her career in 2001. In 2003, she had played her first role as a girl named Kylie in the television series Doc. She was also credited under her birth name for her role as “Young Ruthie” in Tim Burton’s Big Fish in the same year.

When she was 11 years old, she had auditioned for the Disney Channel television series Hannah Montana. She was rejected due to her age but later she was selected as the lead because of her singing and acting abilities.

Subsequently, she had signed a four-album recording contract with Hollywood Records. In 2007, she was credited as the second soundtrack by “Hannah Montana“. The next year, she along with a friend Mandy Jiroux began posting videos on YouTube.

In the same year, she had released her second studio album, Breakout which boasted the highest first-week sales of her career thus far. In 2009, she had released “The Climb” as a single from the soundtrack to the Hannah Montana feature movie.

She had even launched her first fashion line, Miley Cyrus, as well as Max Azria, through Walmart. and was promoted by the release of “Party in the U.S.A.” and the EP The Time of Our Lives in the same year.

Moreover, she had acted in the film The Last Song, based on the Nicholas Sparks novel in 2010. The next year, she had embarked on her worldwide Gypsy Heart Tour which featured no North American dates.

She had played in the episode of Saturday Night Live, during which she performed in a number of skits and poked fun at her recent controversies in the same year.

Furthermore, in 2018, she had performed “Tiny Dancer” alongside Elton John at the 60th Annual Grammy Awards.

Additionally, she has earned a net worth of $160 million. But there is no information about her salary.

Her recent activity says that she had a wholesome image of a highly-sexual person in 2010 which made media commentary and public controversy.

Additionally, she even uses Youtube and has over 11 million subscribers.