Highest-paid model in the world according to Forbes in 2004. She was also featured in Resident Evil. 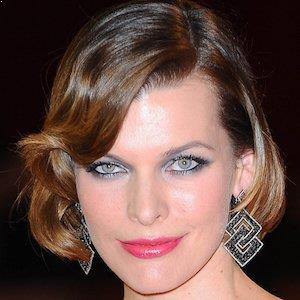 I think that's one of the only reasons God created celebrities. To help those who can't help themselves.

To be an actor, you have to know yourself really well. That's been a major thing for me, to really understand why I do things.

It's going to seem idiotic to say this, but I think that at a given moment we all need a place to ourselves where we can refuge ourselves and cut ourselves off from the world.

I'm not really easy to live with! There needs to be unlimited patience and unconditional love. Men I've known before loved my independent spirit and were proud of my success, to the point that they'd become jealous of the time I devote to my career.

What is the relationship of Milla Jovovich?

Her first marriage, to Shawn Andrews in 1992, ended in an annulment just two months later.

Later, she married director Luc Besson in 1997, and the couple divorced two years later, in 1999.

In 2009, Jovovich married Paul W.S. Anderson, director of the Resident Evil film series. She and Anderson have two children from the marriage, daughters Ever Gabo Anderson and Dashiel Edan Jovovich-Anderson.

Who is Milla Jovovich?

Milla Jovovich is an American actress, model, and musician.

She has appeared in numerous science fiction and action films.

Additionally, she was the highest-paid model in the world according to Forbes in 2004.

Jovovich was born in Kyiv, Ukraine on December 17, 1975, to parents Bogic Bogdanovic Jovovic and Galina Loginova.

As of 2022, she is 46 years old. In 1980, when Jovovich was five years old, her family left the Soviet Union for political reasons and immigrated to London.

Her parents divorced soon after they arrived in Los Angeles.

She had a rough childhood as she got engaged in drug use, shopping mall vandalism, and credit-card fraud during her early life.

She is of American nationality. Furthermore, she belongs to a mixed ethnic background of Russian, Serbian/Montenegrin-Serbian.

Later, she left seventh grade to focus on modeling, which she had started at age nine.

Since then, she has been featured on more than 100 magazine covers, including all the major fashion magazines in the US.

Jovovich is the star of the Resident Evil franchise.

She has also appeared in films ranging from Spike Lee’s ‘He Got Game’ to an art-house thriller ‘The Million Dollar Hotel’, to the Ben Stiller comedy ‘Zoolander’.

All in all, Jovovich has more than 40 credits as an actress.

Some other movies and television series that she has been part of our ‘Two Moon Junction, ‘Guns of Paradise’, ‘Return to the Blue Lagoon, ‘Chaplin’, ‘Dazed and Confused, ‘No Good Deed’, ‘Ultraviolet’, ‘The Three Musketeers’ and ‘Barely Famous’ among others.

Apart from her acting career, Jovovich released her debut album, ‘The Divine Comedy’, when she was 18.

From 2003 to 2008, she teamed up with Carmen Hawk to design the women’s fashion line Jovovich-Hawk, which was well-received by the fashion world.

Jovovich has 3 wins and 18 nominations to her name.

Furthermore, she won the Spotlight Award in 2010 and Scream Award in 2008.

Additionally, she has garnered the nomination for Blockbuster Entertainment Award, Jupiter Award, MTV Movie Award, OFTA Film Award, and Georges Award among others.

Jovovich has not revealed her current salary and weekly earnings.

However, she has an estimated net worth of around $50 million.

Jovovich became part of a controversy after she commented “It’s embarrassing for a man to model’’.

Furthermore, she has not been part of any other controversies.

Talking about her body measurement, Jovovich has a height of 5 feet 8 inches (1.73 m).

Jovovich is active on all social media. She has a huge number of followers on social networking sites such as Facebook, Twitter as well as Instagram.

Similarly, her Facebook page has more than 10.8M followers.

Milla Jovovich Talks About Acting On The Stage With Her Nine Year Old Daughter Ever On Resident Evil; Says “She Acted Me Off The Stage”