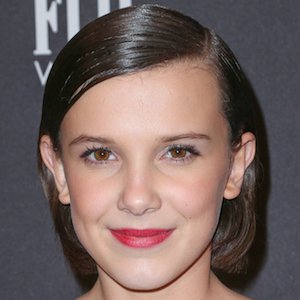 I'm cool with people dressing up as Eleven for Halloween. I definitely want to open my door and give them candy.

Who is Millie Bobby Brown?

Millie Bobby Brown is an English actress and model. She is best known for her breakout role as Jane “Eleven” Ives in the Netflix science fiction drama series Stranger Things. She portrays the character Jane in the series since 2016. She is also famous for her role as Madison O’Donnell in the TV film Intruders (2014).

Millie Bobby Brown was born on 19 February 2004, in Málaga, Andalucía, Spain. Her nationality is British and she is of English ethnicity.

She is the third of four children of English parents Kelly Brown and Robert Brown. Her father is a real estate agent. She has three siblings named Paige, Charlie, and Ava. Her family moved to Bournemouth, Dorset when Brown was four years old, and immigrated to Orlando, Florida, four years later.

Brown made her acting debut as a guest star on the ABC fantasy drama series Once Upon a Time in Wonderland in 2013, portraying the role of Young Alice. In 2014, she had a starring role in the BBC America paranormal drama-thriller series Intruders as Madison O’Donnell. She then made guest appearances in the CBS police procedural drama NCIS, the ABC sitcom Modern Family, and the ABC medical drama series Grey’s Anatomy.

She rose to fame when she was cast for the role of Jane “Eleven” Ives in the Netflix science fiction drama series Stranger Things in 2015. Since 2016, she appears as Jane in the series. For her role in the series, she was nominated for the Screen Actors Guild Award for “Outstanding Performance by a Female Actor in a Drama Series”.

For her performance in the same series, she won the “Screen Actors Guild Award for Outstanding Performance by an Ensemble in a Drama Series” with her co-stars. In November 2016, Brown starred in the music video for Sigma and Birdy’s single “Find Me“. Since November 2016, she has appeared in commercial advertisements for Citigroup.  In January 2017, she made her modeling debut in Calvin Klein’s By Appointment campaign. The following month, she was signed by the agency IMG Models. Brown will make her feature film debut in the upcoming Godzilla sequel, Godzilla: King of the Monsters.

Despite her young age, she has accumulated a net worth of $10 million. But there is no information regarding her salary.

Currently, there are no desperate rumors regarding her personal and professional life. It seems she is doing the best job without harming others for which she hasn’t been a part of the controversy yet. She is loved by everyone for her work and adorable looks. Also, she is so young to be a part of rumors and controversies.

She has a good height of  5 feet 3 inches with a bodyweight of 55kg. Millie has dark brown hair color and her eye color is also dark brown. she has a body measurement of 30-25-34. She wears a bra size of 28 C.