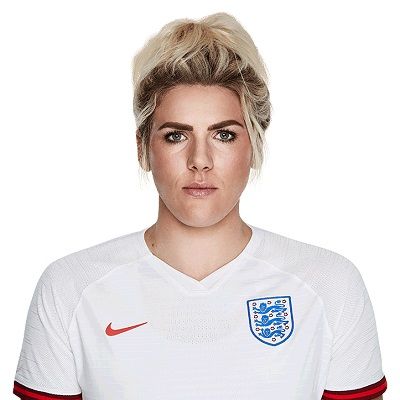 it's where my roots are. I always like to go back. It's a good reminder of where I started and the journey that I still have to go on to get where I want to be.

Until I was about ten, I wasn't that good. I just had loads of energy and loved running around.

When I was younger, I had a fear of being judged as a footballer, and my worst fear was feeling like I didn't belong at the level of football I was playing.

Millie Bright is in a relationship with Jordan Bird. Jordan is a First Assistant on the Pam Barton Course Royal Mid-surrey Golf Club.

He shows his love and support to Millie by sharing pictures with her on social media.

She shares a good bond with her niece and shares sweet pictures of them.

Who is Millie Bright?

Millie Bright is a professional English footballer. Millie plays as a defender for Chelsea and the England National Team.

She is the winner of the 2016 Vauxhall England Young Player of the Year.

Millie Bright was born on 21st August 1993 in Killamarsh, England. She is the daughter of Steve Bright and Nicola Bright.

Similarly, she has a brother and sister.

Millie started her career in December 2014 signing with Chelsea. Chelsea’s assistant manager Paul Green was impressed with and had good thoughts to share about her.

In Chelsea, she finished in first place during the regular season with a 10-2-2 record and qualified for the 2016–17 UEFA Women’s Champions League.

She made fourteen appearances in Chelsea during the 2015 season tallying a total of 906 minutes.

Millie represented England in youth national teams like the under-23 squad.

She scored in a penalty against the US and National coach Mark Sampson ave her a first cap for the senior England National Team.

Recently in May 2019, she was selected for the 2019 FIFA Women’s World Cup and played 2 of the 3 group matches as well as in the Round of 16, Quarter Final and Semi-Final.

In February 2019, she was replaced by Gemma Bonner in the England squad for the SheBelivesCup due to injury.

The estimated net worth of Millie is around $2 million US. Her average salary is estimated to be $43,000 US.

Similarly, she is the brand ambassador of sports brand Addidas.

She is a blue-eyed-blonde. Millie is 5 feet 10 inches tall.

You may also read the age, parents, career, net worth, body measurement and social media of Raúl Ruidíaz, Victor Osimhen, and Brill Garrett