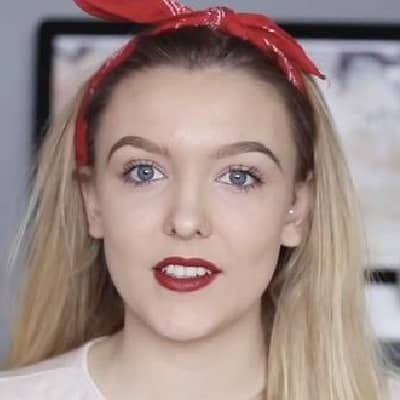 As of now, Millie T’s relationship status is single.

Before, there were various rumors spread about Millie dating Jordan Houston. She confirmed it and was in a relationship with him on November 26, 2018.

Jordan son of England Rugby World Cup legend Jason Robinson. They met each other for the first time in the Maldives.

However, the couple separated in 2019. Millie announced it through a video on her channel.

She was dating Carmie Sellitoo better known as “touchdalight“, a YouTuber. They also used to post different videos together and are good friends.

Who is Millie T?

Millie T is an English actress and vlogger. Her real name is Millie Taylforth who is popularly known as a YouTube star.

Millie was born on September 16, 2000, in Manchester, the UK. Her birth name is Millie Taylforth. Her siblings and father’s name is not disclosed. Although, she seems to be closed to her family members.

In October 2017 she upload a video on her channel featuring her mother entitled “My Mum chooses my outfit for an Entire Week! Disaster”.

She holds British nationality and is of French and Norman ethnicity.

Mille was studying at a local school in her town. And she announced that after her GCSE exams, she will leave the school and will not be joining the college.

Millie T has built her career success as a YouTuber. She is mostly known for her beauty hacks and honest reviews about makeup videos.

She created her YouTube channel on May 23, 2009. Millie was just nine years old when she created it. Nevertheless, she started posting videos only from February 3, 2013, when she was 12.

She received many viewers in her videos crossing the 1 million views mark. Millie’s viral video ‘8 beauty hacks every girl must know’ has been viewed more than 700,000 times.
Her videos like ‘8 Beauty Hacks Every Girl MUST Know!,’ ‘Telling My Best Friend I Like Him… *PRANK*’, ‘Trying $3 Clothes I Bought From Wish! AD are some of the most-watched videos with over a million views.’

Furthermore, she started the second channel More Millie on January 15, 2014. It has around 311K subscribers as of May 2018 with 10 million views.

She often posts different vlogs and about her life on this channel. As she told she wants her fans to know her better through this channel.

Further, the YouTuber has also debuted in an English film, Electricity in 2014 as young Lily. The director of this movie was Bryn Higgins.

She is a member of The Social Climbers, a group of already established YouTube personalities.

There are no rumors and controversies about this star and is doing great developing her career.

Also, get to know about Sapnap, Michelle Randolph, Datrie, and Corey Scherer.