Milo Manheim is an American actor. He is known for his starring role as Zed in the Disney Channel Original Movie Zombies. 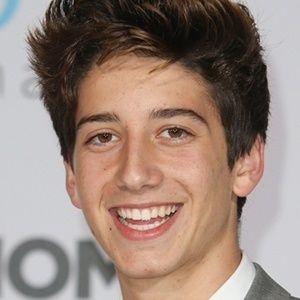 As of 2020, Milo Manheim is possibly single. He has not disclosed the name of his girlfriend.

He is a good friend with Meg Donnelly and they often have seen together.

Who is Milo Manheim?

Milo Manheim is an American actor who is most popular for his starring role as Zed in the 2018 Disney Channel Original Movie, Zombies.

He loves to play guitar, drums, piano, and ukulele, and he dabbles in various wind instruments and enjoys playing volleyball, soccer, and skiing.

He was born on March 6, 2001, as Milo Manheim in Venice, Los Angeles in California.

His father’s name is Jeffrey Brezovar, a model, and his mother’s name is Camryn Manheim, an actress. The information about his siblings and ancestry are unavailable.

From an early age, he had an interest in acting.

He attended Crossroads School. He was also enrolled in the Tisch School Of The Arts and French Woods Festival.

He started his career at the age of seven, in a local after-school program in Culver City. He starred in 20 different musicals with Liza Monjauze Productions Since 2008. Amber horn discovered him when he was performing in the musical Rent.

Milo has raised the fund for the Obama campaign by working as a lemonade stand in 2008. He appeared in a three-line guest appearance on the CBS television series Ghost Whisperer alongside his mother in 2009. Milo starred in the musical ‘Generation Me’ at the Hudson Theatre and playwright horizon in NYC in 2017.

Moreover, he has played poker with Marcia Gay Harden, Cheri Oteri, Rob Morrow, Chad Lowe, Phil Phillips, and Corey Monteith. In October 2017, he was featured on the interview podcast Teens Wanna Know. He has made the guest appearance in popular shows such as The Talk, and Home and Family.

Furthermore, Manheim was announced as one of the celebrities to compete on season 27 of Dancing with the Stars on September 11, 2018, and he was partnered with professional dancer Witney Carson. His favorite TV show is Modern Family, and he would love to work with Ty Burrell.

In 2017, he won Best Leading Actor in the New York Musical Festival for his performance as Milo Reynolds in Generation Me.

He has not been the part of controversy and rumor as he knows how to maintain his personal life properly.

Milo Manheim:  Salary and Net Worth

His salary is estimated to be US$ 12K-15K Per Episode or movie. Milo’s net worth is around US$ 400-500k approx which he earns from his profession.

He is a handsome guy with brown eyes and brown hair.

Besides, he is 6 feet 2 inches tall with a bodyweight of 70 kg including the body statistic of 40 inches chest, 30 inches of waist, and 13.5 inches of arms.