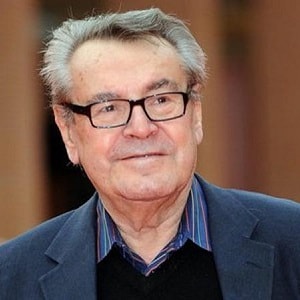 “I get out of the taxi and it's probably the only city which in reality looks better than on the postcards, New York.”

Who is the current wife of Milos Forman?

Milos Forman was married to Czech movie star Jena Brejchová. They met during the making of Štěňata in 1957. They could not hold the relationship and finally, they got divorced in 1962.

Then he got married to Czech actress Věra Křesadlová and gave birth to twins, Petr and Matěj Forman, who are involved in theatre. But he also got separated from his second wife in 1969.

He married for the third time Martina Zbořilová on November 28, 1999, and they welcomed another twin. They were named Jim and Andy.

Who was Milos Forman?

Milon Forman was a Czech American actor, screenwriter, film director, and professor who won two Oscars for ‘One Flew Over the Cuckoo’s Nest and ‘Amadeus’.

He was also the director of ‘The People vs. Larry Flynt and ‘Man on the Moon. He had been awarded Oscar Award two times for the category Best Achievement in Directing in the years 1975 and 1984.

He was born on February 18, 1932, in Čáslav, Czechoslovakia. His birth sign was Aquarius and his birth name was Jan Tomáš “Miloš” Forman.

His mother’s name was Anna and her father’s name was Rudolf Forman. Sadly, his parents died around the year 1944 and he was raised by his two uncles and friends.

He had a brother named Pavel Foreman and who was a painter in Australia. Milos was raised and worked in Czechoslovakia until 1968 and then he shifted to the USA.

He got permanent residence and citizenship in the US in 1977 and his ethnicity is unknown.

He had joined the Academy of Performing Arts in Prague and worked as an assistant to the creator of Laterna Magika, Alfred Radok.

He debuted by producing the documentary Audition in which the singers competed. He used to direct several comedies during his stay in Czechoslovakia.

Likewise, he was in Paris and negotiating the production of his first American film in 1968 and at that time Russian troops were invading Czechoslovakia.

Milos was fired by his employer and he decided to move to the USA. He used to be a professor of film at Columbia University in 1978 and co-chair of Columbia’s film department.

Milos debuted directing in the movie ‘Black Beter’ in 1964 and established himself as a part of the country’s New Wave movement. He came with another movie ‘The Loves of a Blonde’ in 1965 and ‘The Fireman’s Ball’ in 1967. He also directed the movie ‘Goya’s Ghost’ in 2006.

Milos also made his acting appearance in the movies Heartburn in 1986 and ‘Keeping the Faithful in 2000.

According to her wife Maris, he died on April 13, 2018, in Hartford, Connecticut at Danbury Hospital.

His other win was BAFTA Film Award for Best Direction in 1977. He won many awards and he had been nominated several times during his career.

Milos Forman: Net Worth and Salary

Forman had a net worth of around $20 million at death while his main source of earnings was his professional career.

Forman had not been in any rumor or controversy during his life. He used to be secretive about his personal information.

He had light brown hair and black eyes. Other information regarding his body information such as his height, weight, etc. is unknown.