Mimi Rogers is an American film and television actress, and producer. She is known for Gung Ho, Someone to Watch Over Me, and Desperate Hours. She is married and has two children. 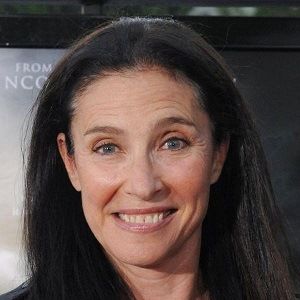 This is a career which is rife with disappointments and rejections, and you sort of have to come to terms with that early on if you're going to survive emotionally. I've always worked, so there was never a reason to say, 'I'm going to walk away from all this.'

I'm a great fan of nude art. I'm also proud of my body. I like being naked. I was given complete control of the shoot. That was essential. I knew I wanted to have children so I realized I'd better get my nude pictures out there before I had a baby and my body changed. This is my permanent record of the way things were once with my body. The reaction I got from my Playboy pictures was very positive and it made me feel good, so that translates into a very positive experience.

Mimi Rogers is a married woman. She has married a producer and director Chris Ciaffa. This duo tied the knot on March 20, 2003. They are blessed with two children, Lucy Julia Rogers-Ciaffa and Charlie Rogers Ciaffa.

Previously, Mimi married a Scientology counselor James Rogers on August 21, 1976, but the marriage didn’t last long so they decided to September 25, 1980.

Furthermore, she married actor Tom Cruise on May 9, 1987,  but the marriage was short-lived and ended in divorce on February 4, 1990.

Who is Mimi Rogers?

Mimi is a veteran American actress and producer who received much prominence in the 1980s and 1990s for her roles in the movies ‘Gung Ho’, ‘Desperate Hours’, The Rapture’, ‘Austin Powers: International Man of Mystery’, and others.

Apart from that, she has also played lead and supporting roles in various television series like the American soap ‘Paper Dolls’, ‘Weapons of Mass Distraction’, and ‘The X-Files ’being some of her major small screens works.

Mimi Rogers was born in Coral Gables, Florida, the United States on January 27, 1956. Her birth name is Miriam Spickler and she is currently 64 years old.

She has a brother namely, Paul Spickler. Mimi holds American citizenship but her ethnicity is unknown. Her birth sign is Aquarius.

She attended accelerated schools and graduated from high school at the age of 14. Instead of studying in college, she formulated her own program of study and became involved in community theater and writing.

She later worked in a hospital for incapacitated patients outside Palo Alto, California.

Mimi Rogers started her television and film career in the early 1980s with the small roles of ‘Sandra Pauley’ in an American police drama series ‘Hill Street Blues’ (1981) and Corrina Girard in ‘Quincy M.E.’(1981).

In 1982, she also played the role of Margo Perina in one of the episodes of the top ranking American crime drama series ‘Magnum, P.I.’ starring Tom Selleck. She then appeared in various television series like ‘Divorce Wars: A Love Story’ (1982), ‘Hear No Evil’ (1982), and ‘Blue Skies Again’ (1983).

Additionally, she played the role of Audrey in the American comedy film ‘Gung Ho’ (1986) alongside actor Michael Keaton.

Likely, she continued to play leading roles in movies like ‘Desperate Hours’ (1990), ‘The Doors’ (1991), and ‘Wedlock’ (1991). Whereas, she also played the role of Leonore Stern in the TV movie ‘The Devil’s Arithmetic’ (1999), based on a novel by Jane Yolen. During 2004, she played the role of President Annie Hannigan in the critically acclaimed sitcom ‘Hope & Faith’.

She was nominated for Daytime Emmy Awards for Outstanding Children’s Special for The Devil’s Arithmetic (1999). Mini was also nominated for Independent Spirit Award for Best Female Lead for The Rapture (1991).

She won Golden Space Needle Award for Best Actress for Reflections on a Crime (1994).

She has an estimated net worth of around $10 million which she has earned from her professional career.

Katie Holmes: Blatant lies about her wedding, her response and the reason of her breakup from Tom cruise! Know it all here!