Minka Kelly is learning acro yoga. She is currently single.

Reflecting on her personal life, Minka Kelly is currently single.

She dated the comedian Trevor Noah from August 2020. The couple separated in May 2021.

In early 2018, she was seen kissing a mystery man. However, there are no reliable details about him.

Kelly dated actor Donald Faison dating back to 2006 and ended in the same year. After her break up, she briefly dated popular musician and singer John Mayer in the fall of 2007 till 2008.

Afterward, she was romantically involved with Derek Jeter at the end of 2008. They dated together for three long years until they separated in 2011.

Following the breakup, she had an affair with actor Wilmer Valderrama in 2012 and separated in the same year.

As per the reports, Minka dated actor Jesse Williams in the year 2017. 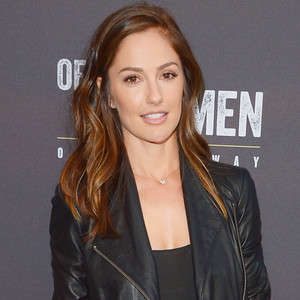 I'm confident - confident in my skin, and I'm cool with my flaws and all that stuff

No matter what you're doing, live it. Make an experience. Have fun. Relate to someone. Take them in. Learn

I didn't go to theater school. I didn't go to Julliard. But I've lived a lot. I've seen a lot. I feel like that makes up for a little bit.

Who is Minka Kelly?

Minka Kelly is an American actress plus a model. She gained popularity for her roles in Friday Night Lights, Parenthood and Charlie’s Angels.

Her father was guitarist Rick Dufay and her mother Maureen Dumont Kelly (died in 2008). She is of French, Dutch-Indonesian, and Irish descent.

She doesn’t have any siblings, as she is the only child of her parents.

However, her educational qualifications, she has attended Valley High School.

Initiating her career, Minka Kelly landed roles on TV shows namely, Nickelodeon’s Drake & Josh, NBC’s American Dreams, and The WB’s What I Like About You, in 2004 and 2005.

Afterward, she got her most awaited breakthrough as a high school cheerleader on the popular football drama Friday Night Lights in 2006.

Astoundingly, after her brilliant performances, she got a role in the film, The Kingdom (2007), co-starring Jamie Foxx and Jennifer Garner.

She also receives an amount of $50k per episode for her TV roles.

After Alabama passed the abortion law, in May 2019, Kelly also opened about aborting a baby when she was young.

She said that it was the smartest decision she could’ve made, not only for herself, her boyfriend but also for this unborn child.

Her hair color is dark brown and her eyes are brown color.