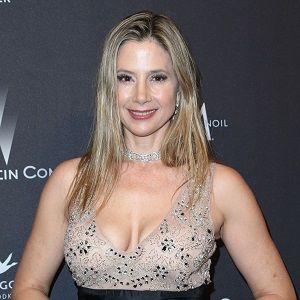 Mira Sorvino is a married woman. She tied the knot with actor Christopher Backus on June 11, 2004, at the Santa Barbara, California, courthouse.

The couple got married after dating him for several months in August 2003. Together, they also welcomed two daughters Mattea Angel and Lucia, and two sons Johnny Christopher King and Holden Paul Terry Backus.

Prior to her marriage, Mira was in a relationship with director Quentin Tarantino from 1996-1998. Additionally, she was also linked up with Marc Anthony, Kevin Costner, and Olivier Martines. Since their marriage, Mira and Christopher have maintained a perfect relationship between them.

Moreover, she has never involved in any extramarital affairs to date. Currently, the married pair are enjoying their company and living beautifully.

Who is Mira Sorvino?

Mira Sorvino is an American actress. She came into the spotlight after winning the Oscars and Golden Globe for Best Supporting Actress for her role as Linda Ash in the 1995 movie Mighty Aphrodite.

Furthermore, she has also appeared in a couple of more hit films such as Mimic, Lulu on the Bridge, The Replacement Killers, Summer of Sam, and a few more.

Mira was born on September 28, 1967, in Manhattan, New York City, New York, United States. She is the daughter of  Lorraine Ruth Davis and Paul Sorvino.

She has two siblings, Michael and Amanda. Talking about her nationality, she is American and her ethnicity is mixed. From the beginning of her childhood, she had a keen interest in acting and writing.

Concerning her education, she completed her high school at the local school. Later, she attended Harvard University for one year as an exchange student with CIEE in Beijing, China.

Mira Sorvino began her acting career with the 1985 film The Stuff. However, she made her major screen appearance in the teen television series Swans Crossing. Prior to acting in the 1993 film Amongst Friends, she got the post of third assistant director, casting director, and then assistant producer.

She came into the spotlight after winning the Oscars and Golden Globe for Best Supporting Actress for her role as Linda Ash in the 1995 movie Mighty Aphrodite. In 1996, she also portrayed the role of Marilyn Monroe in the 1996 HBO film Norma Jean & Marilyn. Moreover, she also got a nomination for a Golden Globe.

Additionally, she landed a lead role in the 1997 horror movie Mimic. Furthermore, she has also appeared in a couple of more hit films such as Lulu on the Bridge, The Replacement Killers, Summer of Sam, and a few more. In 2016, she acted in four movies which include A Christmas to Remember, Exposed, Indiscretion, and The Red Maple Leaf.

Recently, the legendary actress has also featured in the 2017 movie Waterlily Jaguar. Apart from that, Mira has also done some popular TV series such as Norma Jean & Marilyn, Human Trafficking, Like Dandelion Dust, and a few more.

So far, Mira has won a couple of awards. As of now, she has won the Oscars and Golden Globe for Best Supporting Actress for her role as Linda Ash in the 1995 movie Mighty Aphrodite.

Moreover, she has also received the National Board of Review award and New York Film Critics Circle in the category of Best Supporting Actress for Mighty Aphrodite.

Being a veteran actress, Mira pockets a huge amount of money from her profession. Currently, she has a net worth of $16 million.

Once, there was a controversy arose after she spoke out against Harvey Weinstein Sexual Harassment. Apart from that, there are not any drastic rumors regarding her personal and professional life.

Mira Sorvino has a height of 5 ft 10 inches and weighs 66 kg. Furthermore, she has a beautiful pair of dark brown eyes and blonde hair.