Miracle Watts is an American social media influencer, Instagram star, model, and entrepreneur. She is mingled.

Miracle Watts is mingled. Presently, she is dating an actor, rapper, and personal trainer, Tyler Lepley.

On October 28, 2021, Watts announced her relationship with Tyler via Instagram, posting an image.

Earlier, she dated Hasan Suliman, the founder of Powered By Facet from 2012 to 2013. In September 2015, she was rumored to date recording artist August Alsina.

However, Alsina denied the relationship rumor, saying that they were just friends. Furthermore, she encountered Tori(sflyy_), Drake, and Rich the Kid. 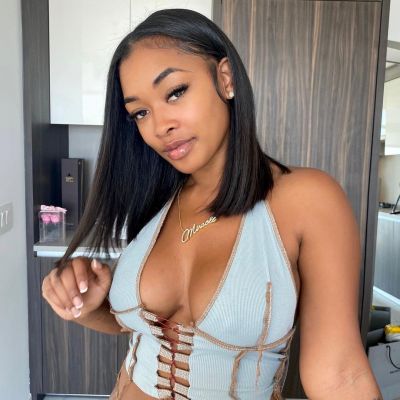 Who is Miracle Watts?

She rose to fame after Drake shout out to her on the OB O’Brien track “2 on Thotful.”

Watts hasn’t disclosed her parent’s identity in the media. However, she has two siblings. Her academic background is also under the curtains.

Further, she is of American nationality and belongs to the African-American ethnicity.

Miracle earlier worked as an exotic dancer at various clubs in Houston. She came into the limelight of the media after she met with Drake. Drake mentions Watts in his second verse, rapping, “You, bring the cash right here, Man / Miracle, sit your ass right here, man!” on OB O’Brien track “2 On Thotful. ” In July 2017, Darke also organized a special “jersey retirement” ceremony for her alongside Lira Mercer and Maliah Michel. He has also customized basketball jerseys.

Watts is also a social media influencer which she began as a professional twerker. She has a self-titled YouTube channel with more than 85.6k subscribers. She posts content related to makeup tutorials, lifestyle vlogs, shopping haul, Mukband, and so on. On January 24, 2016, she uploads the first video on YouTube titled “Miracle Watts Go To Sexy Night Out Full Face Makeup Tutorial. The video has gained more than 264 thousand views till now. To date, she has uploaded 25 videos on her YouTube channel.

Furthermore, she owns a beauty line called The Miracle Lash in 2015. She was previously represented by Facet Studio.

Miracle was rumored that she went through plastic surgery to obtain Beyoncé butts, which she has craved since her childhood. However, she addressed the rumor saying they were pure lies, and she didn’t invest her money in that.

As of 2022, Miracle has amassed a net worth of around $600 thousand through her career as a model, social media influencer, and entrepreneur.

As a model, Watts has a well-maintained body physique. She stands at the height of 5 feet 4 inches tall and her weight is about 61 kg.

Watts has a verified Instagram account under the username @miraclewatts00 where she has more than 2.4m followers. Similarly, she has over 78.9k followers on Twitter, 66k followers on Facebook and 88.1k followers on Tiktok.