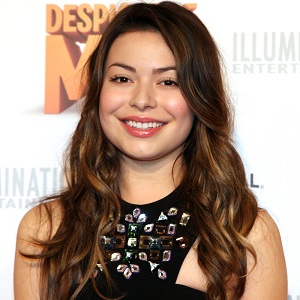 My mom is a really good cook. I didn't get the cooking gene, but she cooks this really amazing dinner every Christmas, and that's always really fun

I like the old, classic scary movies. I love 'Psycho,' 'The Sixth Sense,' and 'Poltergeist.'

Miranda Cosgrove has been involved in numerous relationships during her career. She was in a relationship with James Maslow from 2007 to 2009.  Though the relationship didn’t last long, they are said to be good friends after the breakup. Maslow is an American singer. She began dating Nat Wolff, an American songwriter from 2009. Nat later starred in the movie ‘Paper Town’. The relationship lasted over two years and they eventually broke up in 2011. Miranda is currently not dating anyone and her future plans regarding the relationship status is uncertain at this point.

Who is Miranda Cosgrove?

Miranda Cosgrove is an American singer, songwriter, and actress who is mostly known for her role as lead character Carly Shay on ‘iCarly’, a Nickelodeon teen sitcom, and as Summer Hathaway in ‘School of Rock’.

Miranda Cosgrove was born on May 14, 1993, in Los Angeles, California, as the only child of Tom (owner of the dry-cleaning business) and Chris (a homemaker), Miranda is of English, Irish, and French descent.  As of 2021, she is 28 years old. She was discovered by an agent at the early age of three while she was singing and dancing at a restaurant in LA.

Miranda later said that being an actress hadn’t crossed her mind and that she was lucky to have been sighted by the talent agent.
Miranda was homeschooled after 6th grade. She was later accepted at New York University and the University of Southern California. She chose USC and hence started attending the University in the fall of 2012.

Miranda initially began modeling and also appeared in various television commercials for McDonald’s and Mello Yellow. She only auditioned for a television or theater role when she was seven years old. Her first television appearance was in the pilot episode of ‘Smallville’. She made her debut in films through ‘School of Rock’, a 2003 movie starring Jack Black. Her performance for the movie was praised and appreciated by the critics as well as the public.
Miranda had her first role in a television series in ‘Drake & Josh’. She played Megan Parker in the show. Her second major role in a theatrical film was for ‘Yours, Mine and Ours’ which didn’t do so well at the box office.
‘Carly’s was released on September 8, 2007. This became Miranda’s most notable work on television. The show was praised and loved by many people. She also performed numerous musical numbers in this show which helped her to establish herself as a singer. She also voiced Margo in ‘Despicable Me’ 1 and 2.
Miranda has had 34 credits to her name as an actress for various movies and television series. ‘Crowded’, ‘The Intruders’, ‘A Mouse Tale’, ‘The Good Wife’, ‘The Wild Stallion’, ‘The Blue Elephant’, ‘Grounded for Life’ are some of the movies and TV shows that she has been involved in.
Apart from her career in acting and singing, Miranda is also active in numerous philanthropic projects. She has been active as a supporter of St. Jude Children’s Research Hospital which is situated in Memphis. She is also a national spokesperson for ‘Light the Night Walk’.

Miranda’s net worth is estimated to be around $10 million. She took $180,000 per episode for ‘early, making her the second-highest-paid child star on television in 2010. She was also listed in ‘Guinness World Records as the highest-paid child actress in 2012.
She has been nominated a total of 31 times for various awards. She has 2 wins to her name for ‘iCarly’ and ‘Despicable Me 2’.

Miranda was rumored to be dating Harry Styles, Nathan Kress, Drew Roy, and David Archuleta at a certain point of time during her career. Miranda was involved in a controversy over her leaked Instagram picture for some time. She was also criticized over her claims on the 2011 bus crash which cost her a huge sum of money.

She has a height of 5 feet 6 inches tall and weighs 54 kg. Her body measurements are, her bra size is 32A, her waist size is 24 inches and her hip size is 34 inches. She has a hair color that is dark brown and her eye color is also dark brown.