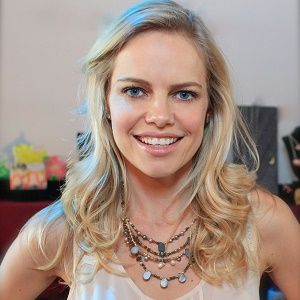 I had my first apartment when I was 16. I got good grades, so my friends would be able to come over to 'study.' We'd party, and they'd cheat off me. Everybody won

I've been in L.A., but I wasn't acting. I didn't know that I wanted to act, so I was in L.A. but working at a restaurant seven days a week and trying to figure out what I wanted to do and all that kind of stuff.

Mircea Monroe is in a relationship. She is having an affair with Stephen Merchant. He is an English writer, director, radio presenter, comedian, and actor. The couple started dating in the year 2017. The couple is then seen making public appearances in award functions, shopping, etc.

Who is Mircea Monroe?

Mircea Monroe is an American model and actress. She has starred in the television series, Episodes as Morning Randolph, Hart of Dixie as Tansy Truitt, etc.

Monroe was born on 11th March 1982, in St. Louis, Missouri, United States. During her childhood, she was raised in South Pacific islands of Fiji and the Solomon Islands.

Her ethnicity is unknown and nationality is American. There is no information on her parents and siblings. However, her father attended the University of Chicago and graduated in the History of the Religions.

Talking about the educational background of Mircea, she graduated from the Virginia Commonwealth University.

Monroe started her career as an actor from the movie, New Line. Later, she starred in the movie, Cellular in 2004, and in the same year, she was featured in the cover of the magazine, Maxim.

Other movies in which she played are All Souls Day, The Contract, One Long Night, Fast Girl, Into the Blue 2: The Reef, The 41-Year-Old Virgin Who Knocked Up Sarah Marshall and Felt Superbad About It till 2010.

Apart from the movies, she has shown her talent in television and web.

The 36-year-old actress Mircea’s net worth is estimated to be around $2 million and her salary is unknown.

During her entire career, she always maintained a top-notch professionalism over her work. Her work was always admirable, and her hard work reflected on how well she did in his career. She always maintained a decent and admirable image in her entire career without attracting any rumors and controversy. Instead of attracting unwanted attention, she made everyone believe that she has no interest in becoming a controversial figure.

Mircea has a height of 5 feet 6 inches and weighs 51 kg. Her hair color is blonde and eye color is blue. Her body measurement is 36-25-36 inches. Furthermore, her shoe size and dress size is unknown.