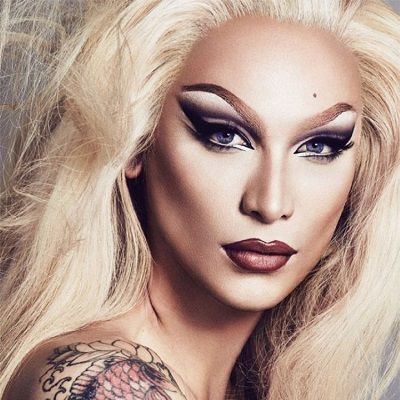 “One year later, after my thorough mental house-cleaning, he set me free. o be honest, it was I who set myself free by accepting the help when I need it, and for, that I am forever grateful.”

“My therapist taught me how to walk through my pain, face every dark chapter and release myself from the emotional baggage."

"I cried, I shook, hyperventilated and got physically sick to my stomach as I do when I’m overwhelmed."

“Knowing their struggle pains me as I can relate to the hurt of these special members of my circle."

Miss Fame is married to Patrick Bertschy since 2013 approximately. Patrick Bertschy is a Certified Tax Expert, an advisor for individuals and corporates alike. He specializes in wealth and estate planning.

Both Mr. and Mrs. Bertschy consider themselves gender-fluid. Their permanent residence is in Paris, France and they live with their beloved dachshunds, Mina and Shaya.

Who is Miss Fame?

American Miss Fame is the stage name of the actor Kurtis Dam-Mikkelsen. Miss Fame is a model, makeup artist, a drag queen, and recording artist.

Fame is the first-ever Drag Artist to walk the red carpet of the Cannes Film festival.

She is the 7th Place Queen in the 7th Season of RuPaul’s Drag Race.

Fame along with other Drag Race alumni danced behind Christina Aguilera for the Spring 2019 opening ceremony collection.

“The Fetish of Fashion” is her personal makeup line that was released late in 2018 October.

Miss Fame was born Kurtis Dam-Mikkelsen in Templeton, California, US and was raised in San Luis Obispo, CA by her grand-parents in their chicken-farm. He graduated in 2003 from Templeton High School, Templeton, CA, US.

The murder of her beloved grandfather invoked anxiety and depression as a teenager. So her grandmother sent her to a therapist.

Miss Fame chose to be famous and live life she saw fit. As an LGBTQ, she refers to the National Alliance on Mental Illness and to quote ” LGBTQ people are three times more vulnerable to mental illness than straight individuals”.

She encourages all to come clean about their personal struggles, and accept much-needed help. As such, Miss Fame is part of a community that champions self-respect among others and wants you to do the same.

Miss Fame does it all, one transformation at a time.